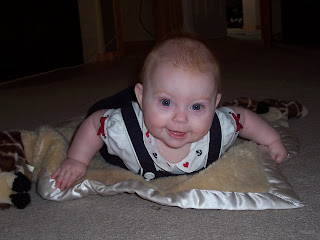 So many of my posts are about the oldest child. He is just at "that" age where everything he does or says is funny or annoying, or both. It isn't Skadi's fault that she is a second child. So in some effort at fairness, I am hereby devoting this post to her. That pesky other child shall not be named in this post.

Skadi rolled over for the third time on her 4 month birthday. Why for the third time? Because her first two roll overs were when she was five days old. No joke and I have two credible witnesses. She thought she would take a break though and not give us proof that we were raising a particularly extraordinary baby. (Though we know she is.) In the last three weeks her mobility has gone from zilch to moves a foot in either 30 seconds or 30 minutes, depending on what is near her or what needs to be grabbed, or the necessity to avoid or grab a dog's tongue.

AB and I observed her watching us eat. She would flip her tongue around and munch with her mouth. So a little over a week ago we started her on solids. Rice cereal was particularly blah to her, but after a few days we went to applesauce with a little rice cereal mixed in. Heaven for the ravenous beast. We feared for our fingertips while feeding her this as she dives for the spoon (while simultaneously gagging herself). She is a quick learner, that gagging isn't so fun, things go so much better if she politely takes a bite and smacks her lips afterwards. Sweet potatoes were alright, though not the hit that applesauce was, BUT she found the holy grail last night in a nectarine straight off the tree.

I was carrying her around as I chomped my nectarine. Finally she went in for the kill, grabbed the nectarine and latched on. Yes, latched. She suffered immediate withdrawal effects evident by the screaming that ensued, as I instinctively pulled it away. And here is where it might be better to be the second child. I did what I never would have done with my first. I returned it to her and let her latch (don't worry I kept my hand on it), sucking all the nectarine juice she could get. And probably a few bits of nectarine as well. Nectarine juice from head to toe... on both of us.

Her daycare teacher told me that she doesn't think Skadi will take much serious in life. She is bound and determined to make the other babies smile in the room. She has a great toothless grin and loves to giggle. She tries to engage the other babies, but so far finds them to be a bunch of sour pusses as they only resort to screaming about her antics.

Skadi is different than her older brother in that she likes to hold things. For the other child, toys were for throwing on the ground while he sought to engage people. Despite her desire to entertain others, Skadi is a little more introverted and focused. She has a bunny - little nutbrown hare - that she loves. When you hold it in front of her she opens her arms and embraces it happily. She holds nutbrown hare for quite some time and occupies herself easily inspecting the ears, eyes and tasting the ears and feet.

Skadi has finally figured out the Jumperoo. She bounces, though she doesn't do it out of sheer desire to bounce (like some other unnamed child). She bounces to please us. Once we are out of sight, the bouncing ceases immediately. Standing nearby causes low level bouncing, while direct eye contact and smiling results in gleeful bouncing.

She is a decent sleeper. She goes to bed about 8pm. Still consistently up at 2-3am to nurse, back down until 4-5am, quick nurse and usually out until 7am. Her naps are fairly inconsistent, but usually an hour in the morning and three hours in the afternoon.

She is a happy girl provided she gets her sleep and has a full tummy.
Posted by Nuclear Mom at 5:31 PM