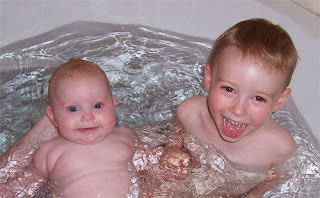 When my son was in daycare as an infant, his teacher told me one day he was a "willful charmer". He was... and he still is. She warned me we were going to have to keep an eye on him. And wow she wasn't kidding.

Leif was invited to a birthday party on Sunday. I had no idea who the child was who invited him. It was a girl and had to be one of the older children in his class as I know most all of the younger ones. I had assumed it was an all class party, and so had no problem declining the invitation since he already had filled his social calendar for the day with another child's (who we know) birthday party.

Turns out it isn't an all class birthday party actually. And in fact, appeared to be more of an all kindergarten girl's birthday party and Leif. I finally figured out who the birthday girl was when she came up to me yesterday and told me how sad she and her girlfriends were that Leif wasn't going to come. A few other girls came up and said, "yeah, why can't Leif come". I informed them that we had other plans, but I hope they had a great time.

I really wanted to scream, "he is not your boy toy! Keep your claws off of him! He is a mama's boy and believe me, you don't want a mama's boy." Little hussies. (My daughter will be much smarter and will not fall prey to boys with pretty eyes.)

AB and I fear for Leif. He is showing all the signs... all the signs that he will have little girls calling for him anyday now. And all the signs that he understands the phrase, "if you got it flaunt it". The way he flashes me a dimpled smile after I tell him not to do something or decline him something he wants, just as if he were saying, "but you know you want to" strikes fear in my heart.

My willful charmer.
Posted by Nuclear Mom at 4:16 PM