I was struck with one of my pet peeves twice this past week. That pet peeve being... don't try to sell me on something I am already sold on. Or put simply, quit wasting my time.

I signed Skadi up for a swimming class called Tub Time for last Saturday. One hour and $25 later left me irritable, though ending in the hot tub did mellow that irritability. The first half hour was "classroom" time and the second half hour... well actually, the last 20 minutes by the time we got to the hot tub, was in the water. I signed up, I paid, I showed up with my 10 week old in her ultra-cute, yet practical for the summer swim suit. (Check her out... yes, my carpets suck.) 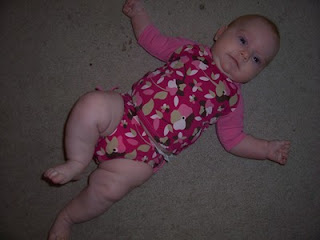 You see not many people with babies sign up for swimming classes, let alone that early. That should serve as some indication of who your target audience is when designing the classroom portion, shouldn't it? Lesson one, know your audience.

My husband and I both started swimming at very young, both about age 4. My parents put me in because we were always around the lakes and they felt it was important I learn to swim. AB's put him in to help with his scoliosis. AB eventually became a competitive swimmer, a swim instructor and a lifeguard. When I was 10, I ran out of classes to take, joined the team, but since I couldn't compete until I was 12 I abandoned the sport in favor of gymnastics. We are active people with a love and respect for the water. Probably typical people who actually sign their child up for this type of class AT a private club.

So don't sit me down and tell me why my kids should take swimming class. Preaching to the choir. (And wasting my time.)

Then there was last night... my son's orientation for his move up to primary (Montessori preschool). My poor head is covered with bruises now from both my grandmother's visit AND a full wasted evening watching the center owner very slowly, with child-like wonder and amazement in her eyes perform each and every work station in the room like we might see our children do.

I was under the false impression that this orientation was to explain to us parents the practical side. What do I need to bring? How often do I bring snack? What is the schedule? The two other families I spoke with post-orientation-from-hell heaved heavy sighs riddled with pain when they broached the topic. I was happy I was not the only one feeling pain at their core for this 1.5 hours. (Ok, I snuck out at 1.25 hours.) Nope, V's pain was physical thanks to 1.75 hours of sitting in sucky chairs. And she is most likely STILL feeling the pain in her back tonight and for days to come.

And I still don't know. (And btw... I was sold on Montessori almost 2 years ago when my one year old started washing his own hands, signing and helping with his own diapering.)
Posted by Nuclear Mom at 10:10 PM