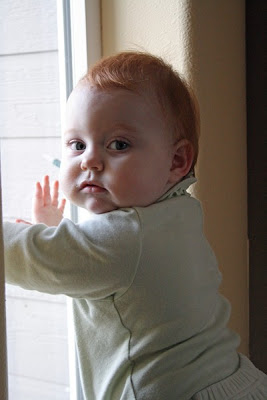 Skadi's 9 month appointment was this past week. She remains a giantess.
24 lbs 3 oz - 98th percentile (she dropped a percentile from her 6 month appt.)
29" - 87th percentile
(A quick Leif comparison at 9 months - 20 lbs 12 oz and 28", about 50th and 75th percentiles respectively.)
Skadi is a crawling beast. She motors. And when she is a real hurry... like in a race against time to get to the bowl of dog food before you do? She gets that leg up under her and pumps away to get extra distance that mere mortals would never be able to accomplish.
She pulls up on nearly everything. This afternoon she crawled onto a box that arrived in the mail for a certain person's birthday... Anyways, on top of the box she perched herself. She is cruising from object to object with some success - though failure is frequent... and painful.
Another difference from Leif is her preferred food. Leif nursed until he self weaned about 13.5 months, which was great for me. He did at times get too busy to nurse, and he liked his solids.
But could someone tell me how one small child likes to put SO much in her mouth off the floor that she picks up, but then sits in her high chair and refuses everything but Wagon Wheels, Baby Mumm Mumms (finally found those) or a couple occasional puffs? She's not a fan of jarred food and although she likes mashed banana will quickly regurgitate every bit as though she had a baby bird to feed. We put bits of green beans, peaches and rice in front of her (all within the last four meals) only to have them flung across the dining room. She finds sippy cups with water a little interesting and worth of a little investigation, but they are short lived. What she really wants?
Mama milk. Maybe Leif just started slacking on the milk early, but at 9 months I am amazed at how much she still nurses. Which is fine with me right now.
Skadi is a sweetheart, though she has a horrible temper. She isn't the easy going kid that Leif was. Taking a tiny bit of tissue away from her that she found on the floor usually results in a full body flail attack. She wants what she wants, when she wants it.
All in all though, she is a great kid. So different in so many ways from Leif. Though she is his biggest fan (especially after this last four days of poop regression... she is the only one in this house not cleaning poop up after a full week and a half of successes). The two kids get each other going during dinner and it is hard not to laugh. Leif does something, she laughs, he repeats (at which point with anyone else, the antic is old, but not with Skadi), she laughs, he repeats... to infinity (and sometimes beyond). You can't help but smile though seeing Skadi's face light up.
She loves her big brother and he loves her. Someone tell me this will never change. 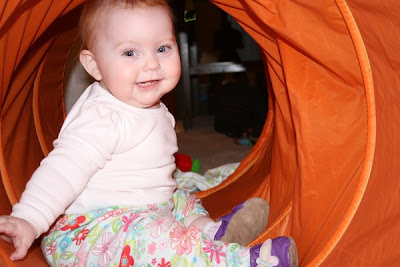