I am making good progress on my January goal to organize my library. Since my last post on this topic I cleaned off the file cabinet (notice I didn't say "out").


I ordered a wall lamp from Pottery Barn (clearance), which I think will work great in that room. I hesitated to buy a desk lamp because it would be another thing to clutter the desk and for the kitty to knock off and break (we have had a lot of this lately, so I am quite sensitive to it). I decided to hedge away from floor lamps. And maybe it is just because I have bad memories of cheap torchierre lights from Target that bend and contort and tip.


Well what did that leave me? Wall mounted. And wow, lamps are expensive. I got a decent deal on PB, not great, but it will work and I like it. 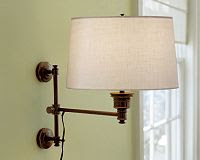 AB is happy with this purchase too, which to me is very valuable since I don't often hear that from him.


I still have my photo archive boxes to buy and fill, my desk to tackle this weekend then after that everything visible will be organized.


That leaves the inside of the file cabinet (that place where I was tossing papers in a somewhat willy nilly fashion last weekend) and the "mudroom" in the library... the big structure my husband built to house winter gear. (I have to admit to not even digging in it this year yet to find my own gloves... I fear it that much.)


These last two places fall in the somewhat "optional" category for me in this process. I know the stuff in the file cabinet isn't *that* old or out of order since the file cabinet was new a year ago - and I haven't used it very much. And with the cedar winter clothes storage I just don't have a much better option right now. And since it is out of sight, keeps like items together and functional, my vote is to leave it be. Though I would like a cushion on top of the bench for sitting on... and that would "soften" the room substantially. But that WOULD mean a precarious trip back to the fabric store. I am not sure I can do it!


Anyone know where I can buy a premade, inexpensive sitting cushion for a bench? With cool fabric of course.


With the end in distant sight for my library, I have started considering which room will be next. This room was a medium sized job, but since February is short I was thinking tackling one of the smaller job rooms would be best.


Problem is... I am not sure I have a small job room. At first glance I would say that would be either Leif's room (which was redone last year and new storage added in October), the formal dining room (aka sewing room and play room) or the living room. But all of these have one underlying problem in my scheme... very few little issues, but each has one big issue of varying types.


In Leif's bedroom - he needs his display shelves cleaned off, an hour long job maybe, he could help me thus making it 1.5 hours. He needs his stuffed animal storage net hung (which would take AB 10 minutes). But his closet looms. He calls it the "Monster's bedroom" and we keep the door closed all the time. Mostly to hide all the stuff in storage in there (luggage, Halloween decor, wedding stuff, old textbooks, old clothes, etc). It would be nice for Leif to have a closet and I could quit using the nursery closet for him. It is a decent walk in closet... packed. And I just so don't even know what to do with the stuff in there. That is the issue with THAT room.


My living room. Simple organization, organize the cds and dvds and no big deal. Except for the media storage thing we started on before Leif was born, our priorities shifted, and we never finished it. It WAS a coat closet. Yes, odd place for a coat closet (if you have been in my house). So we took the door off, painted shelves and put them in with the intention of making built in media storage. We planned (and bought some of the stuff) to remove the door molding and finish it as built ins. At this point we could just forget all that and the door could go back on and just hide the whole mess of media stuff. Or I could hire a contractor to finish it. ($$$$$$$$$) I don't know what to do other than procrastinate and be forced into a decision when it is time to sell the house. And THAT is the issue there.


The last one would be the formal dining room/playroom. It could use some better toy storage... but that isn't a big issue. The big issue is what it really needs is wine storage. We have cases of wine stacked in there and need at minimum, a 100 bottle wine chiller. ($$$$$)


So there are the issues in those rooms. A quick rundown on the other rooms in the house (and feel free to offer up suggestions):


Nursery/guest room: Will be tackled in March when we plan to move the Beaner to her room. The longer we can keep the queen bed in there the better. (Anyone want a very comfortable - according to family - queen sized bed in March?) This room won't cost a lot, but it will be A LOT of organization and decorating (with already purchased items). Just time is needed here.


Utility Room: This is an option for February. I have a fair amount of storage in here from my closet that houses craft stuff and cleaning supplies, the over the appliance cupboards that need organized and the coat closet. Then there is the top of the shelves I put in there that act as landing place for when AB doesn't want to open the door to the garage to return a tool. (Hmmm...)


Kitchen: It's too exhausting to even list. Suffice it to say I need pull outs. Need. And the floors... bamboo laminate is on the radar. This is getting pushed back to a month with money. (Do those exist?)


Master Bedroom: Just time is needed to go through the dressers and stuff. Decide what to do with the weight bench, etc. It wouldn't be a hard room, but I don't want to tackle until Skadi is out of there.


Master bath and closet: Time consuming with the closet and I want lots of closet organizers - so potentially pricey. The big part isn't for me here, but is for AB in repairing some broken trim in the bathroom and likely ripping out the linoleum patch and installing tile or something where we had a shower leak that ruined a section of our 6' x 4' linoleum.


Oh and the last place... guest bath: Actually this is a good candidate for February. It's just really organizing in there and buying containers to hold things and drawer seperators. It would probably only really take a weekend...
Posted by Nuclear Mom at 3:12 PM