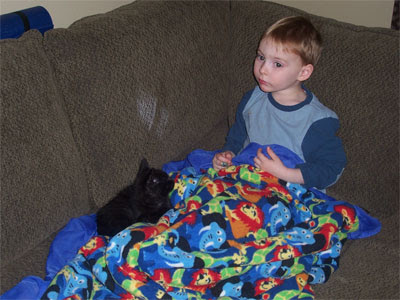 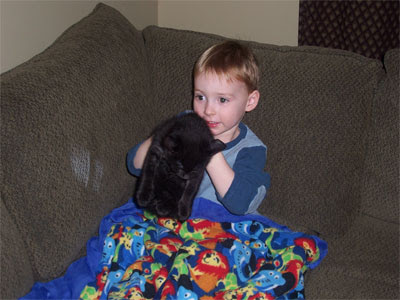 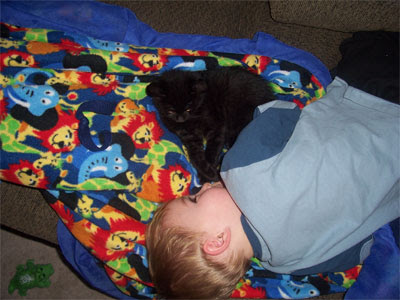 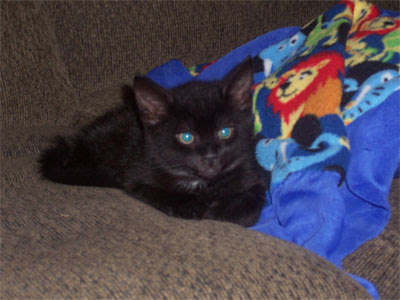 Lucky has a home!

We arrived about five minutes late to pick up our kitten and the coworker couldn't throw him/her in the carrier fast enough and get us out the door! I slowed her down a little saying I wanted to make sure that one was the one we wanted. After a few minutes, and knowing I really didn't want the long haired fluffy kitty who had fallen for Leif already, we went with the second kitty showing interest, Lucky.

After about 10 minutes he got tired of waiting and decided a movie was a better option. About five minutes later Lucky sauntered out of the carrier, jumped up on the couch and walked across it and found a nice place to settle on Leif's blanket next to him.

Lucky is a sweet tempered kitty, who so far loves Leif and me. Lucky isn't so sure about Skadi yet, and frankly, I haven't let her get close enough to test. Lucky is probably getting more used to AB after him being home much of today. But this morning he/she was leaving AB's attempts at playing to follow me around.

The one we need to work on is Winny. Winny is over the moon excited and can't wait to chase Lucky around the house, on the walls and around in circles on the ceiling. Lucky, thankfully, is holding his/her ground and not running. But there is a lot of hissing and spitting going on. Though a little less this morning than last night.

Right now the kennel is the safe haven and where Lucky is sleeping routinely.

And the new automatic litterbox? No problems at all with using it!