Cause that's the way things happen on the Polar Express... or not... (part 2)

Ok so the bakers did smile... photographic evidence and all... but there was no dancing or singing the favorite "Hot Chocolate" song. 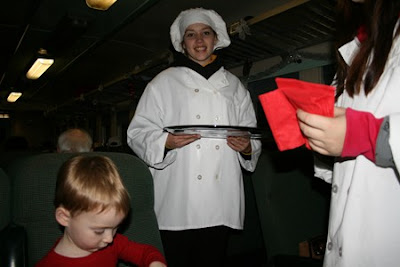 Leif makes a friend with the boy next to us. (This was taken minutes before the boy slipped and fell and split his chin open requiring stitches and lots of paperwork by the Hood River authorities... evidently we were the most prepared people for every eventuality... they don't even carry a first aid kit on the train...) 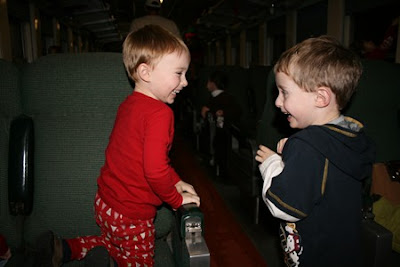 Finally! Santa comes on board! 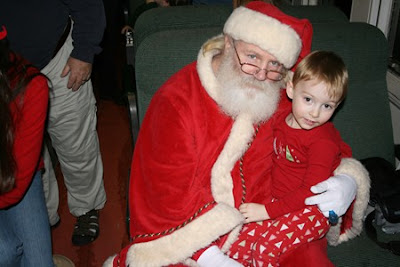 "Well ok... you really want to hold her even though she is sleeping?" Truth be told, *I* wasn't sure I wanted him to hold her lest she wake up and start screaming. We were an hour 15 minutes on the train at this point and I was getting tired. 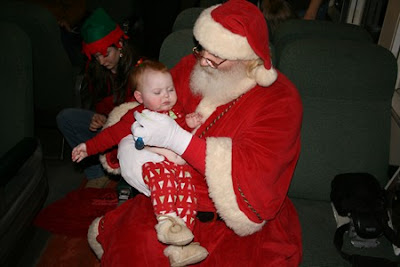 A sweet moment... what you don't see is my frazzled demeanor at this point... oh wait, you see I am no longer smiling. This was seconds before Leif bonked Skadi on the head waking her up for the rest of the trip. 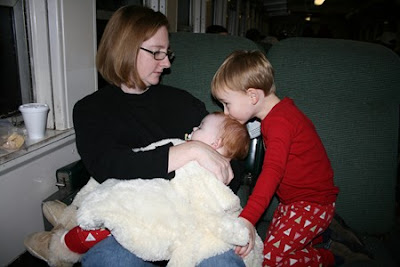 Ok, so our tune changed. Leif liked it all, or so he said the next day and told us he wanted to go back. We tempered our knee jerk response of "fat chance" with an all knowing "maybe next year".

We had two issues... first off, it could have been so much more. So maybe the bakers didn't need to sing and dance, but they could have at least played the Hot Chocolate song in the background. I know they could have because it was playing when we got on the train.

Second? At three hours long, from the time you arrive at the box office to stand in line until you pull your car out of the parking lot, it was way too long. The train ride could have EASILY been half as long. Easily. That length of time is way too long for three year olds... and there were A LOT of three year olds on this trip.

To help ease the length of time issue it would have been nice to deboard the train at the North Pole, let the kids run around a little, meet Santa outside, etc.

Then AB will add in the hokeyness factor... If you are going to be hokey, go all out. The conductor played his role well. The obnoxious teenagers posing as elves who were really too cool to be there were just annoying.

(Apparently we had more than two issues...)

For me it was a disappointment, it could have been so much more.

However, what worked for me was getting out of town, staying in a hotel with a pool with the kids, eating out in a different place. Getting up in the morning and walking around Hood River with the snow falling lightly worked. Getting lattes and hot chocolate at a little coffee shop, browsing the toy store and downtown shops. Going to Cathedral Ridge winery. Having at least one child sleep the whole way, each way.

Hood River reminded me of a small, less touristy Estes Park with a little splash of Boulder mixed in. I love that place.