A holiday in the life of a toddler 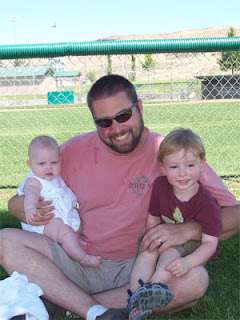 Fourth of July started out by calling my sister to wish her a Happy Birthday.

Leif: "I love you grandma!"

Then we headed to the park for some playing on the equipment and so I could get a picture taking spree in. 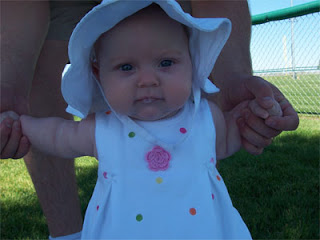 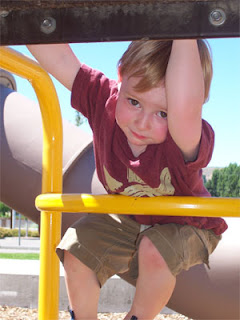 After buying some fireworks and feeding Leif, I headed out with Skadi to get V and do some shopping. The trip started out frighteningly productive at The Gap (after a short somewhat productive trip to TRU for the kid's upcoming birthdays), then it petered off when nearly everything at Gymboree was quite familiar (too familiar?) and Children's Place lacked plain non-fluorescent colored shorts for itty bitty girls.

The afternoon continued at home after Leif woke up from a nap with a visit from his friend, J. J's mom was looking for an excuse to get out of the house with a sick husband at home, so they came over.

The boys played and played in the swimming pool. I learned that Leif knows how to speak German with nearly perfect inflection as he took to repeating phrases that J was saying to his mom. I also learned that I might have the most sensitive little boy on the face of the earth.

We were in his bedroom getting out of swimming clothes and he tells me, "J is mad at me".

NM: "Well Leif let's go out and see if J wants to play trains and I will watch to see if he seems mad at you."

(No indication of any anger on either little boy's parts until an hour later when it was time to leave.)

Apparently running around in the hot sun was good for Leif though... he ate nearly three chicken drumsticks, a bowl of shells and white cheddar and corn.

Afterwards we got ready for fireworks, a little mini display in front of our house with some sparklers and fountains and firework turtles (go figure, Leif picked them out).

And best of all... C came over to watch. And C likes hugs as much as Leif does.

(However Leif did inform me this morning that the sparkley turtles were scary last night.)
Posted by Nuclear Mom at 2:04 PM