Ready for the weekend!

Oh wait. You mean it is over?


This is one of those days where if I had loads of vacation time - I would be staying home tomorrow to recover.


It has just been one of those weekends. It started with two minor household chores that each turned major in their own right.

Part of the February-March goal was to get and install a pull out spice rack. After much deliberation and measuring the cabinet - at least four hundred fifteen times - I placed the order. If you ever want to put pull-outs into existing cabinets I have to recommend you look at Rev-A-Shelf. Really nice quality. And you don't have to replace the entire cabinet like Home Depot started out telling me we had to do.

All you need to do is yank the door off, remove the shelves and hardware, attach your door to the front of the unit, then screw it into place in the cabinet!

We had thought about everything - like even that the knob on the adjacent corner cabinet would have to be moved. And that it would be the only cabinet in the kitchen with a funky placed knob - but we could deal with that when we were talking about the bigger picture - a fancy pull out spice cabinet! 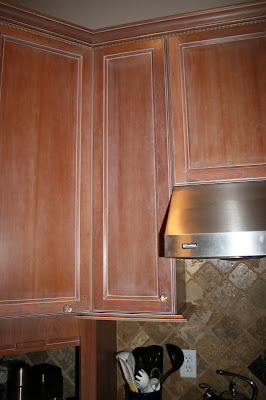 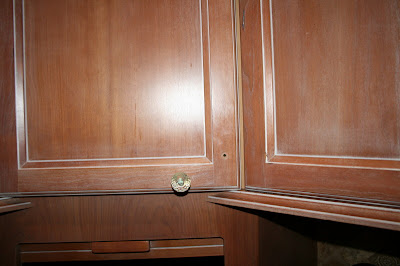 A little wood putty will fix that...


Remember when I said we thought about everything?

Yeah, I was wrong.

We did NOT think about the hood. 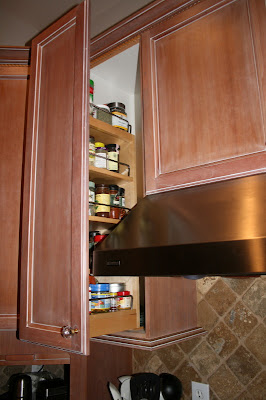 We still love the pull out, though a little disappointed at neglecting that one detail. But if we had it to do over I am not sure we would have changed and done anything different.

The next task this weekend was to replace the coveted instant hot water tap. I never had one of these before moving into this house, but I have become freakishly dependent on the silly thing.

Perfect French Press Coffee in 4 minutes flat. Top Ramen for the kids in 3 minutes. Starbucks Via in as fast as you can dump the packet in the cup and fill the mug with water. Tea? Your steeping time is all. Instant oatmeal for the kids? Only as long as it takes the oatmeal to cool to edible temp.

So when it cracked and emptied itself all over the bottom cabinet a few weeks ago it was a no brainer that as long as it was under $300, it was getting replaced.

If you don't already have one, it would be a pain to install as you need the hole in your countertop. But replacing one? Also a no brainer.

I took Leif to a birthday party and came back to find the heater sitting still in the middle of the kitchen floor. Turned out that the one I bought was ever so slightly bigger than the one we pulled out. Making installation in the same position impossible thanks to the placement of the garbage disposal.

We went to work debating the next move.

I cringed at that and pushed for mounting it in a different under the sink spot that would only require a copper tube extension.

This is my thing, I reminded him. See you just need connector compression fittings and a length of copper tubing.

And I added on that it would take me seconds to do in my lab and I had all the equipment there. Though that was just anecdote to boost my method because no way was I driving all they way out to work to do use the tools in my lab OR to "borrow" the necessary fittings. Dang lab rules.

Instead Skadi and I ran to Ace to grab copper tubing and fittings. And then we bought a tube cutter too... since the Ace dude had NO idea how to cut tubing and I knew the edges would need to be cleaned up before installing ferrules.

Hooked it up and it worked!

Then I walked upstairs all full of myself to change laundry around, pulled open the dryer and saw my wet clothes sitting there.

As in not dry.

I pushed the button.

Once AB confirmed that I was not being a dork with the dryer and that it was not the breaker, I pulled the clothes out and hung them on the banisters.

Then I pulled the clothes out of the waher and hung those on the banister.

Then I pulled AB's work cell phone out of the bottom of the washer.

Yeah, one of those weekends.
Posted by Nuclear Mom at 8:44 PM

The spice rack looks great! Does it pull out much past the range hood?

Too bad about the phone OH OH! Does he have insurance on that thing? If not he will pay dearly. . .

Many dryers have an internal fuse. Did you check for one? If the dryer gives no heat but tumbles this is usually the issue. The reason it goes is because the bimetal switch stays clicked on and the dryer over heats

Sorry the weekend seemed short. You do so very much I am not surprised you could use another day!