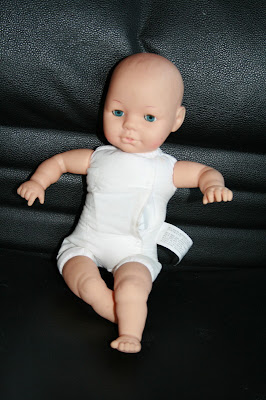 Skadi gave her favorite baby doll a name a few weeks ago.
"Bossy"
At first I asked her if she was sure that was her baby's name? She looked at me like I was an idiot. Of course that is her name. And not only that, but it has stuck. It stuck with everyone at the cabin last weekend and Bossy plays a central role in Skadi's life.
Bossy never wears clothes, she has this horrible voice thing stuck in her chest like a huge pacemaker that when pinched just the right way (thankfully Skadi isn't strong enough to pinch it "just the right way") Bossy cries "wah wah wah" or "mama mama". Skadi isn't particularly fond of her crying - thankfully.
We were driving this morning and I saw a torn up doll that looked just like Bossy on the side of the road and was fearful that at some point I had put her on the roof of my car (we tend to do this) and drove off without her (we do this too - though usually with drinks or cell phones up there).
I was happy when we got back today and Bossy was laying in the middle of the living room floor.
Posted by Nuclear Mom at 5:35 PM