So I have decided to get back to my one room a month routine. One month I will tackle putting together, organizing and setting up a room. I keep telling myself this will take forever and I would like to be "in" the house, fully IN our new house earlier. But it's not going to happen. It's just not a logical approach (yes, I am part Vulcan apparently... and if you haven't seen Star Trek, go see it. Now.). The one room a month IS logical and will get me further on my path to being IN the house and also it engages AB better because he knows whiat the priority for the month is.

The remainder of May (since I just started this) and all of June is the foyer. It doesn't sound like a lot, it isn't a huge area, but it is the first area people see when they walk in my house. And I have ideas and plans to put into motion.

The post from a few weeks ago is where I started.
Here it is during the Memorial Day weekend paint-fest: 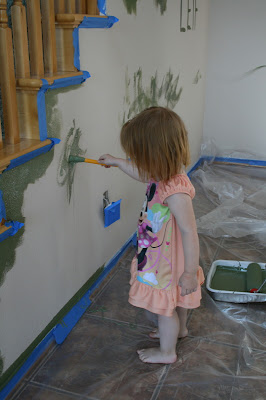 Skadi loved painting and she was terribly helpful. When she decided she was done she had two green feet - and I had more paint on me than she had on her favorite "Icky Mouse" pajamas.

And here is where it stands now: 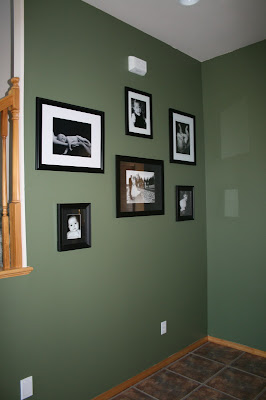 Favorite black and white pictures are up. 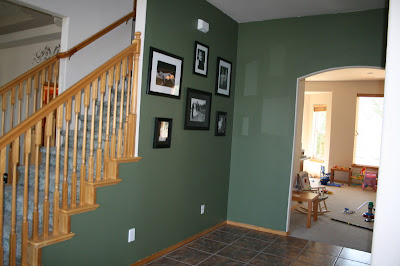 I have a great mirror to hang perpindicular to the pictures, but AB lifted it up, chastized me a little for thinking I was going to use nails and suggested he was going to need anchors and screws (same as in the other house I guess) to mount it and he didn't have time today. So the next task is to hang the mirror. 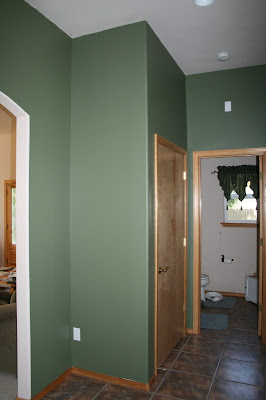 Next task after that is the touch up stuff. I have a lot of green edges to touch up.

And white on the ceiling... somehow.... somewhere I will find a white that matches. Yes, I am a klutz with the paint and am apparently no longer allowed to tape the ceiling... or paint near the ceiling.

I also want a bench. A nice bench to put under the photos. I had wanted a bench and coat hanging thing, but we don't use the front entrance to go in and out and we have a coat closet *right* there. So instead I will get a bench.

And maybe a side table to put across the arch in the photo above by the coat closet?

Yes, with it being summer and all, it WILL take me all of June to do this list.

Month of July is Leif's Star Wars themed room. Goal is to have THAT done before his birthday on July 29th.