We got up early and boarded the plane to Minneapolis and then from there to Orlando. All five of us. The two and a half year old could hardly stand it he was so excited. He was getting on a PLANE! Then we took off and he was done. No more interest. Enough of that, let's go do something else now. That made for a relatively LONG set of flights from Washington State to Florida.
Once in Orlando we got our LOADS of luggage (you need a lot of crap for five people for 2 weeks). We were missing one piece - our suit carrier with our dress clothes for our dinner at Remy on the ship. We had been kind of tossed up on doing that since it is extra (ha ha ha, jokes on us, everything is extra...), so we were nearly giving up and figuring if we were missing a suitcase we would rather it be this one. Then they found it. It had fallen off the baggage cart. Got a cab and headed on our way to the Universal onsite hotel - Cabana Bay Beach Hotel.
For being the least expensive onsite hotel I have to admit I was impressed. The kids LOVED it and even weeks later still call it "that really nice hotel we stayed in in Orlando". The pool area was awesome - not that we had a ton of time there, but the kids and AB did get in one evening swimming. They have a Starbucks onsite and a decent hotel restaurant that is appealing to kids. The rooms were a bit small, but we were all fine. They sent a crib up for us and we had a great time at the hotel. I would totally stay there again.
We opted for the Park Hopper ticket because we wanted to be able to ride the Hogwarts Express back and forth. You can't do this without a park hopper ticket. And you want to do this. It is totally worth the price difference.
We got in early (1 hr early admission for hotel guests despite it being REALLY early for us on Pacific time) and beelined it to Hogsmeade. The whole two days was great and remains the highlight of my two weeks vacation. Nothing was busy and we walked on nearly every ride the first day. The second day we had a few 20-30 min waits. Both days I had the Cottage Pie at the Leaky Cauldron and Leif had the fish and chips. The Cottage Pie was a very yummy pie crust with a ground beef mixture and topped with mashed potatoes. And Butterbeer. Yum.
One of the things that we hadn't experienced before was the child swap. We LOVED the Universal child swap setups. We loved having a room with a changing table and chairs and usually videos playing to watch at the end of the line, before getting on the ride. At Universal part of the fun is the walk to the rides, so Silas got to experience this also. And then on a few, we switched more than once! At Disney they just hand you a Fast Pass. And that has its advantages as well, come back at your convenience. But it meant the person with Silas had to go find something else to do while the three rode. I am surprising myself by saying that Universal was just far better equipped for kids that aren't big enough to ride.
Leif's favorite ride - Gringotts
Skadi's favorite ride - She doesn't know - Jurassic Park, or Transformers or Men in Black (which she rode about 5-6 times) or Harry Potter, but NOT Minions
April's favorite ride - Gringotts (And Leif is in trouble for taking me on that freaking Minions ride)
AB's favorite ride - Men In Black or Gringotts
Silas' favorite ride - the Seuss carousel
So here is our two days at Universal in photos! 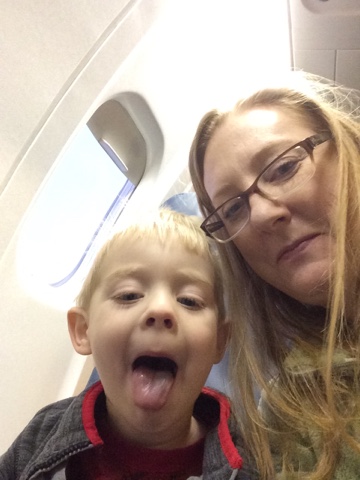 Silas on the plane - anything to keep him entertained. Oh and upon departing no one told me what a well behaved little boy I have. 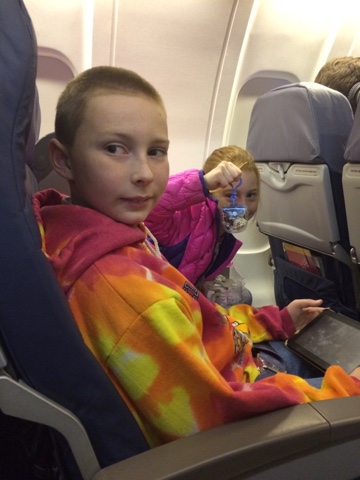 These two did awesome. 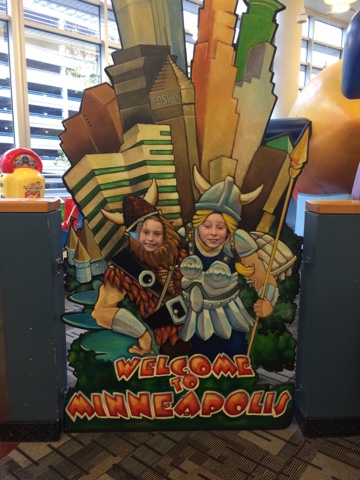 Minneapolis wasting 5 of our 60 mins layover. 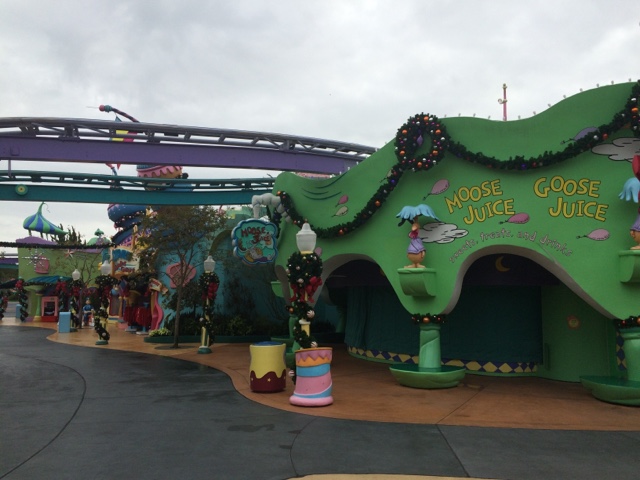 We love Suessland. One of the places where Silas could do nearly everything (except the sky trolley!). 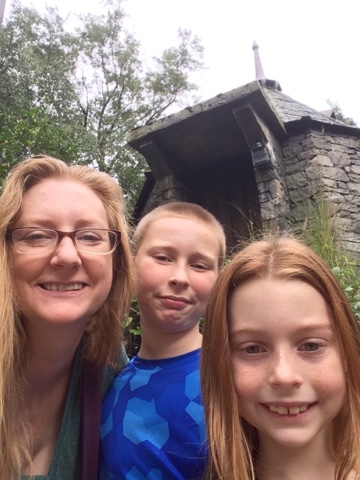 Flight of the Hippogriff. In front of Hagrid's home. 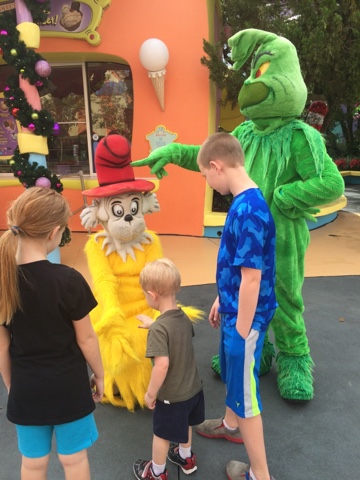 Meeting Sam I Am and the Grinch. 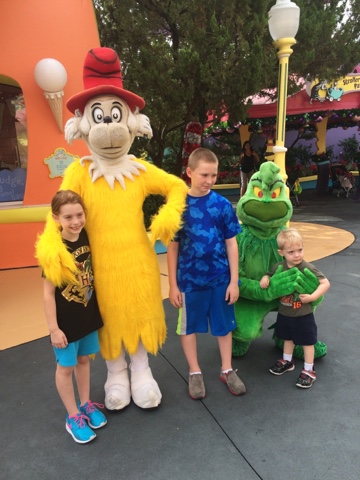 Sam and the Grinch 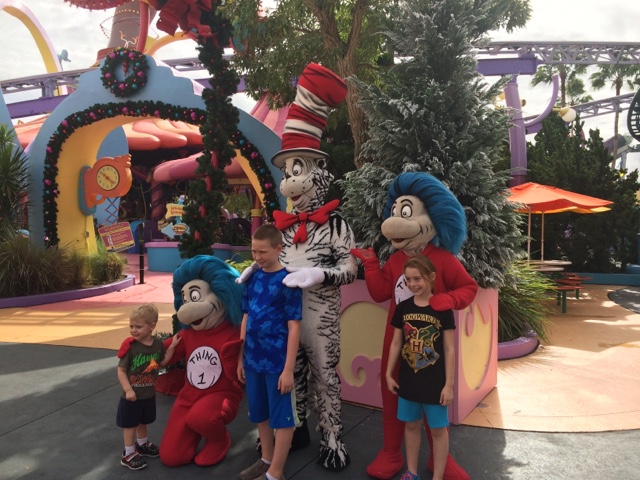 The Cat in the Hat and Things One and Two. 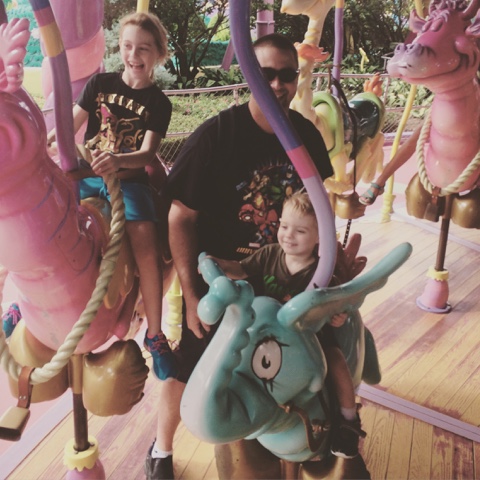 Silas LOVED this ride. He picked out his blue elephant himself. Skadi is also obviously enjoying herself. 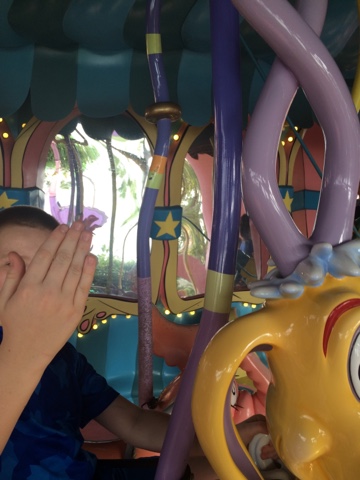 This one didn't want to be photographed on the little kids ride. 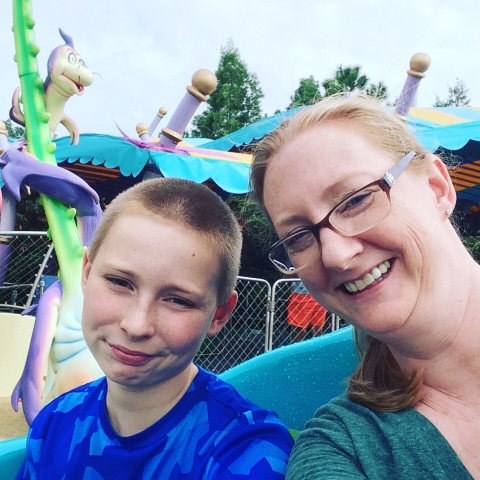 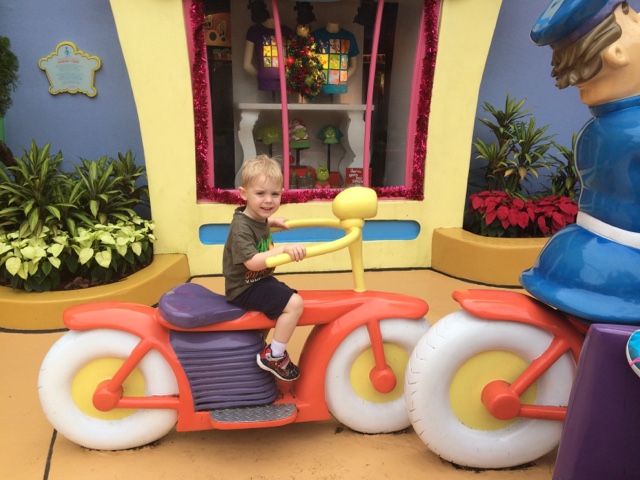 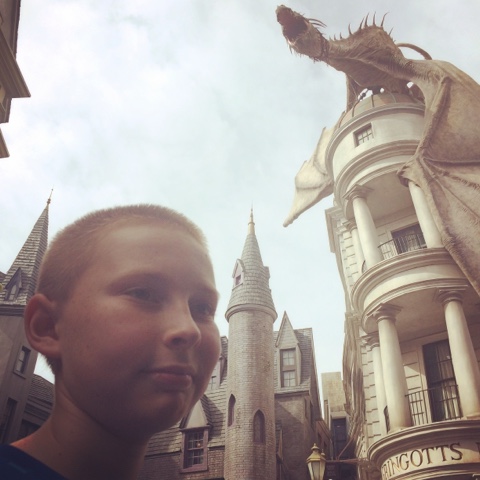 We took the train (ultra-cool) to Diagon Alley. 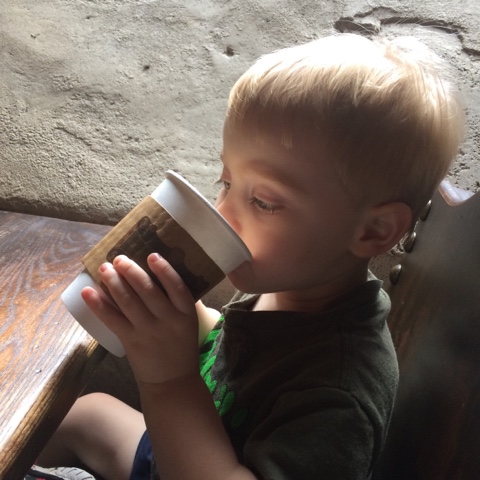 Someone was digging MY hot Butterbeer. 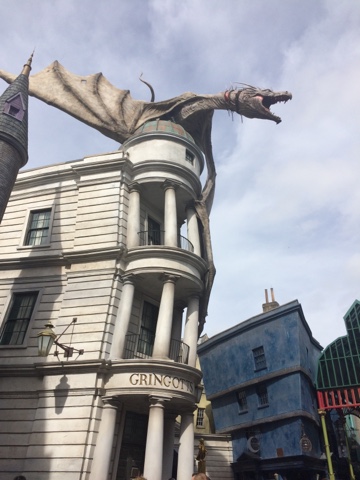 Gringott's Bank ride - this one was great. 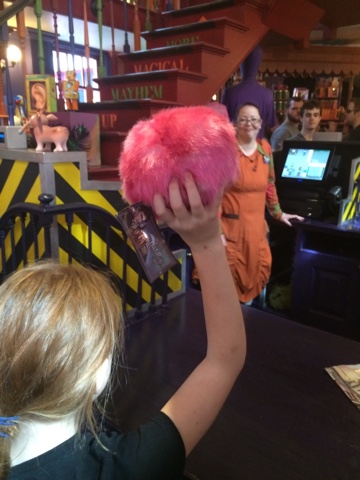 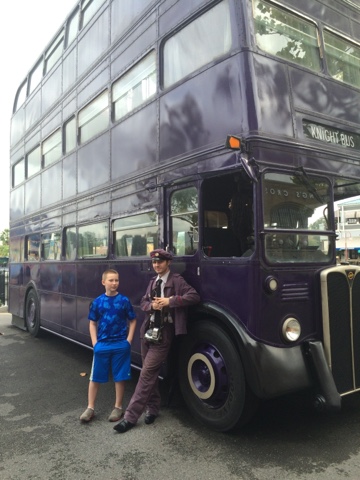 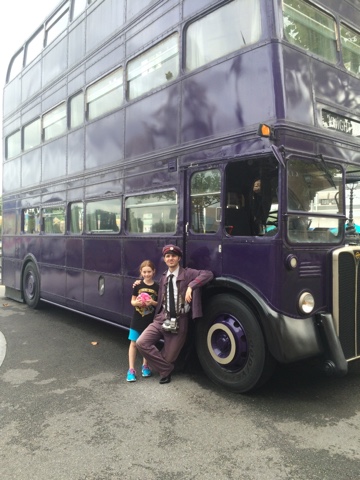 Skadi had to meet him too. 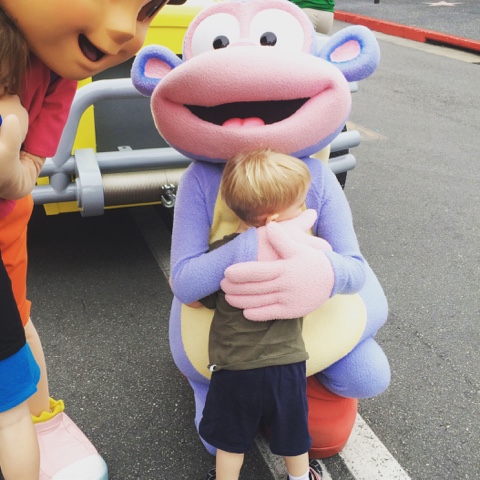 Finally something for Silas - BOOTS! And Dora! 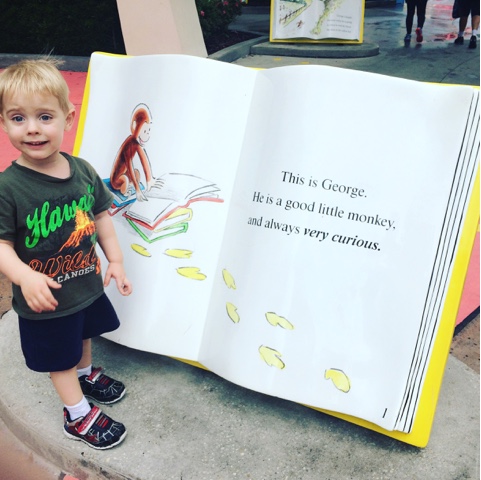 One of Silas' favorite characters. Curious George. He played in the George Play area for quite awhile. 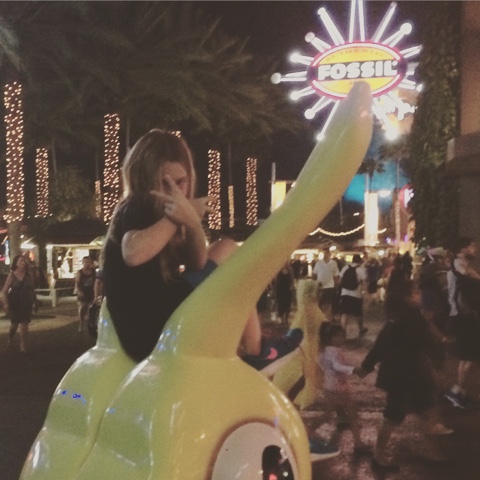 Eating dinner. I don't know where she learned this pose, but it is entirely way too old for her. 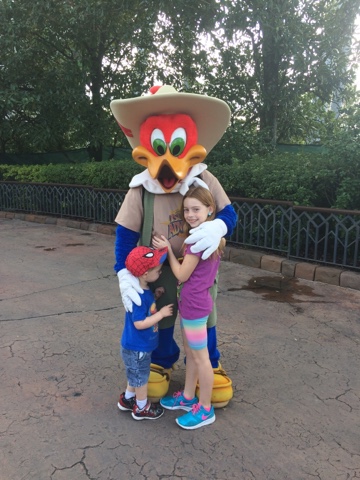 I am pretty sure they have no idea who this is. But Woody was walking through the park when the kids bombarded him. 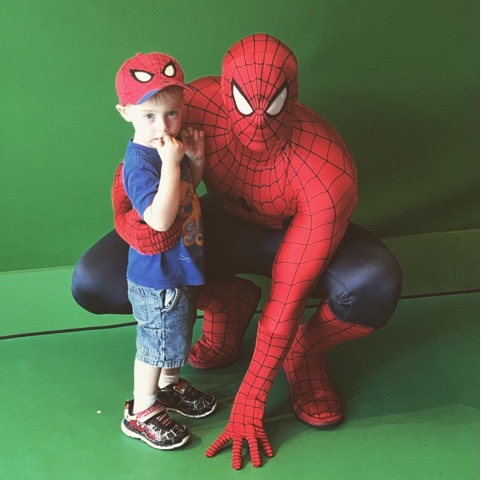 Silas was SO excited to see Spiderman and we talked about it for weeks before. He admired the photo of Leif and Skadi from three years prior with Spiderman. He was completely star struck. 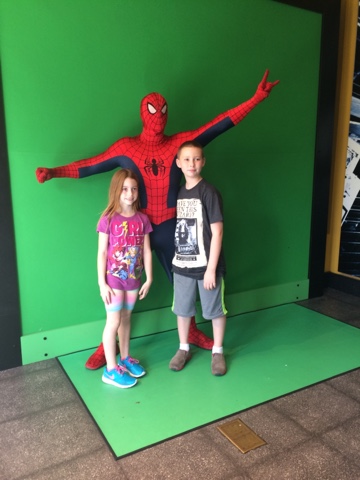 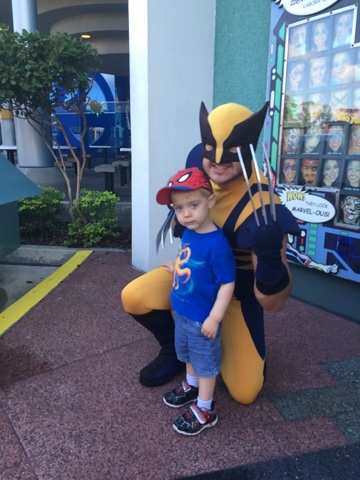 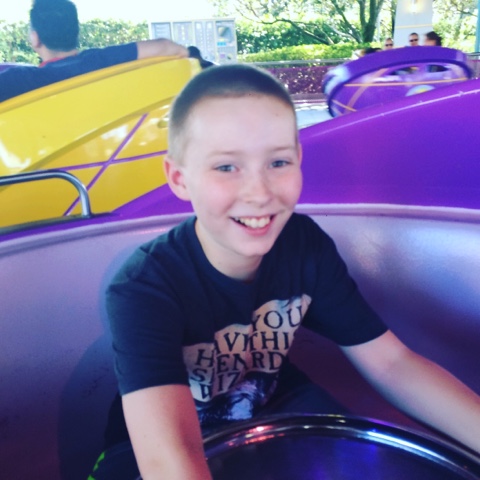 Trying to spin me and make me puke. Lucky for me he spent the entire time fighting the inertia in the wrong direction. 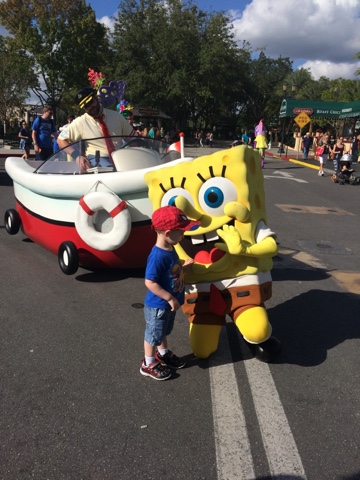 Gummy Bear. Or SpongeBob. But Silas thinks he is a gummy bear and that's fine with me. 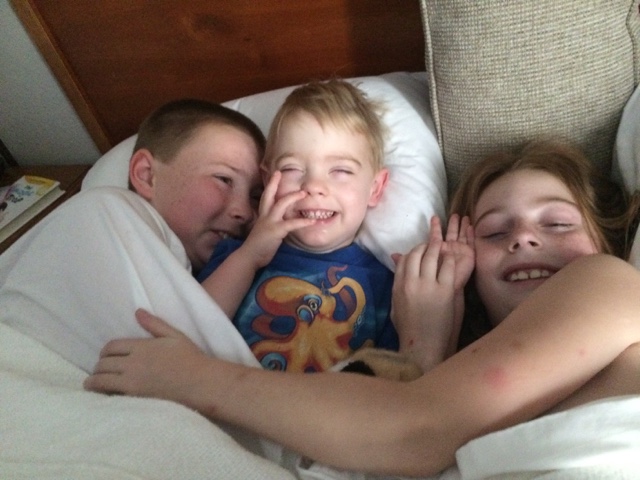 In the bed getting ready for the next phase of the trip!
Posted by Nuclear Mom at 6:07 PM