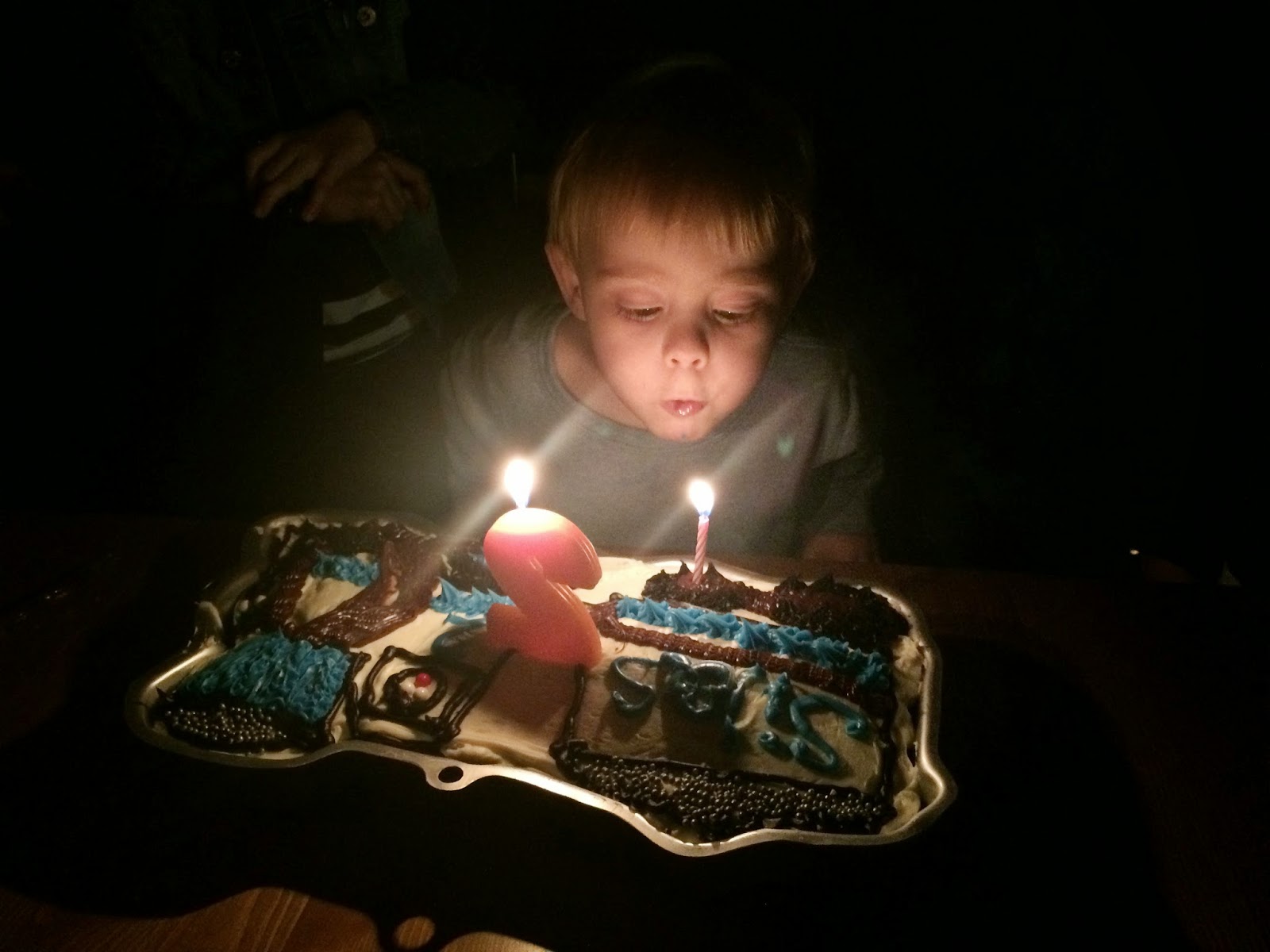 I say this all the time. But it's real. How is it possible?

How is it possible that my kids are growing up so quickly? TWO! Silas is TWO! My little blonde haired, blue eyed boy.

Silas' birthday landed on the Thursday after Easter - so it has been a big week for him. We practiced all week saying "I am two!" and singing "Happy birthday". But until the party Friday where everyone sang to him, focused on him and put a giant cake (WITH FROSTING!!!) in front of him, he didn't really grasp it. And well, he maybe didn't really grasp it then either. 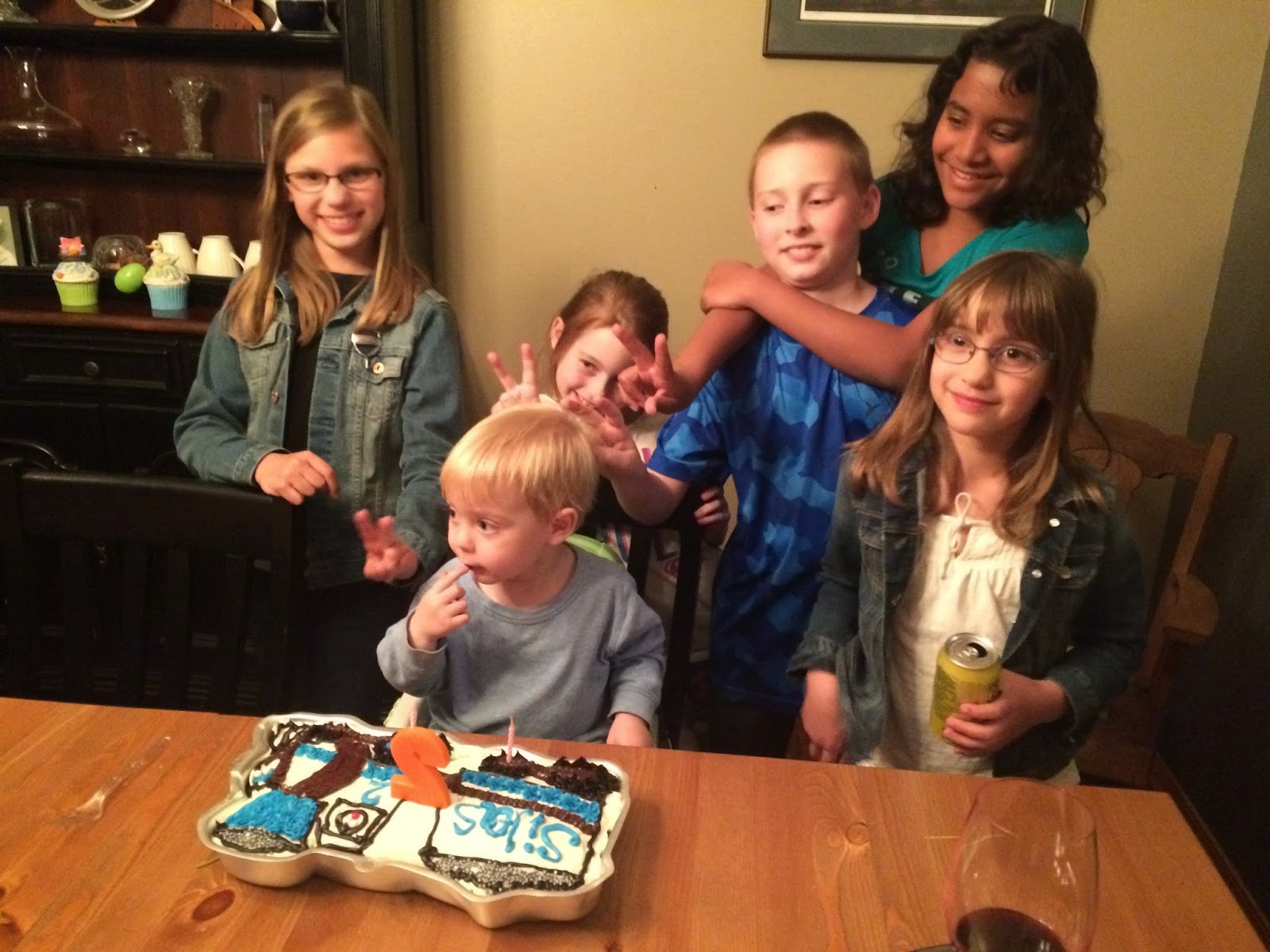 Silas is my rough and tumble one. He has to be to keep up with his brother and sister. As has been par for the course with my kids, he is a talker and advanced there. He speaks in 3-4 word sentences and uses a huge variety of words and is really moving along with conveying his needs and frustrations. He calls Skadi "KK", Leif is "Lay" and Odin is Odin. Lucky is "Ki-Cat". He has transitioned from mama and dada to mommy and daddy.

Silas has coveted every balance bike he has seen in the past few months, so we got him one. We have heard, for the last 4 days since he opened it, "I got a bike!" Poor beep beep (the farm ride on toy) has been cast aside in favor of a BIKE! 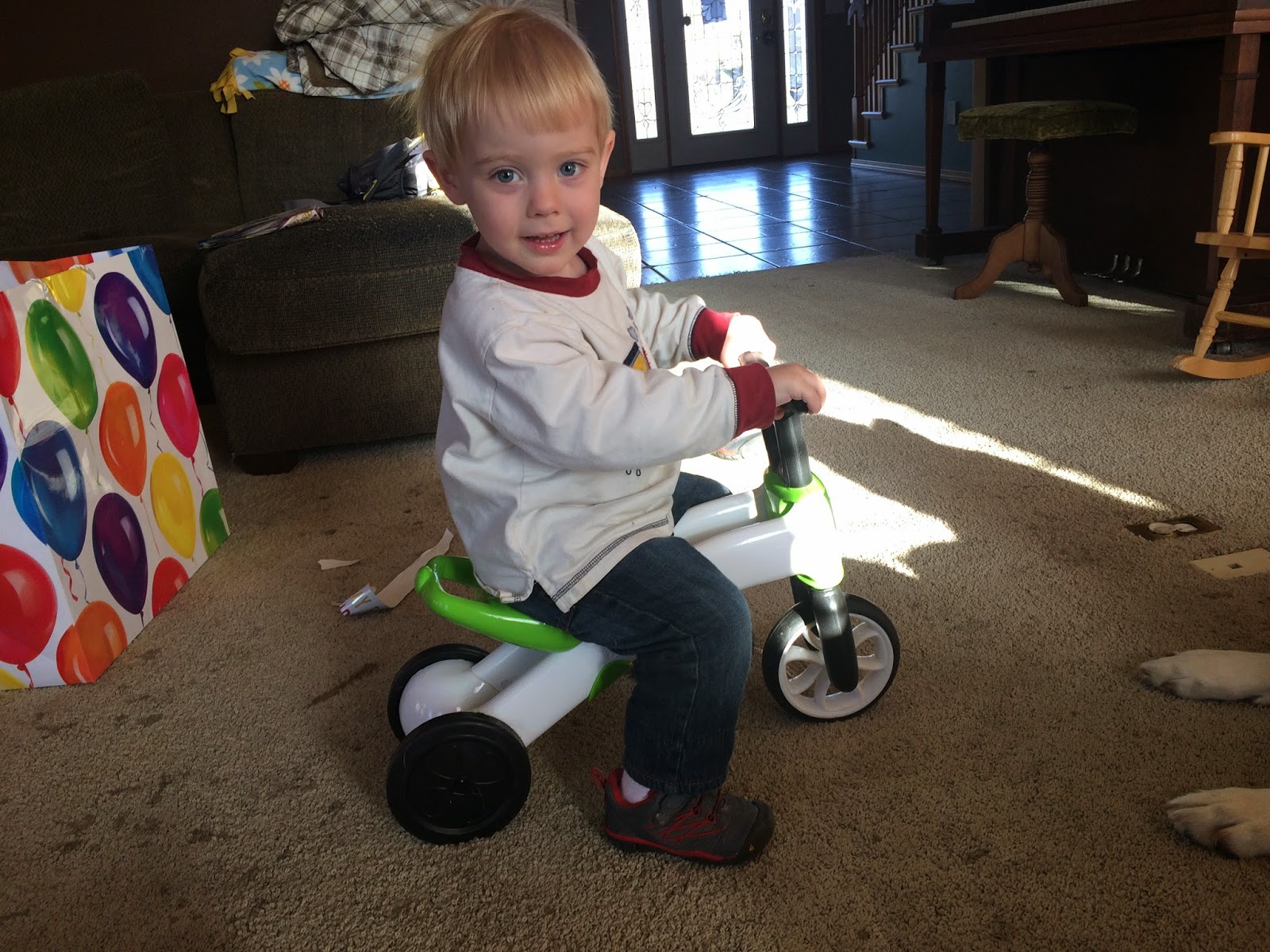 Silas' favorite things to do (aside from ride a bike) is to feed the animals. Odin's food dish is always overflowing, the Goldfish has plenty of food to cloud up his tank and Lucky gets fed twice a day - which hasn't happened in ages. But Silas is diligent in doling out the food - though heaven forbid one of them (Odin) decides to swipe something from him. That will definitely ruin his day.

His other favorite thing to do is "go outside". This is actually a very particular request though. He doesn't really want to go out into the backyard to play. He wants to go into the driveway and ride whatever convenient riding toy he has up and down the slight slope.

We are pretty convinced he is the smartest toddler around too. He counts to 10. No joke. I have no delusions that it is anything more than reciting what he has heard just like he does "Twinkle Twinkle Little Star" or "Head Shoulders Knees and Toes". And probably the fact that we squeal with joy when he does it means he has learned that "I do this and it makes them happy" thing.

Silas is an excellent sleeper, sleeping through the night 90% of the time -  8:15-7am. He naps like the dead - 3-3.5 hrs usually. Eating... the child has an amazing sweet tooth. And kind of like me - once hungry, the attitude (normally happy go lucky) changes. Hangry.

Silas is kind of a solitary kid. He is wary of other kids invading his space and they better not touch the item he is interested in. He reminds me a lot of Skadi in mannerisms. He will bowl you over and isn't one to be bowled over.

He still loves his thumb and we love it too. Love not having to keep track of a pacifier. I am sure the day will come when we like it a bit less. But already he is to the point that he only sucks it when he needs to calm himself down, or at nap/bed time.

KK is his bestest friend in the whole world and she is amazing with him. She plays with him and engages with him and appeals to his dangerous side as she flies him around on beep beep or his scooter. Leif is an incredible help with Silas, gets him out of his crib, fixes breakfast for him, brushes his teeth, helps get him dressed, but isn't the one who is going to entertain him like Skadi does. All in all, both kids make for the best team with Silas.


Silas truly made our family complete. We are so blessed to have him. He is an amazing boy. I love his little kisses, his hugs, his learning and seeing the world through his eyes! I love you Silas!