So we headed from Homer towards Soldotna, which is a sleepy little town for 9 months of the year. Then it turns into an absolute madhouse during the summer as people swarm the Kenai River in order to slay salmon. And we were there right in the midst of it all. Of course we missed the peak of the run by a few days it sounds like, but we are skilled and didn't leave empty handed.

The first night we were there I finally managed to make it down to the river about 11pm. I pulled in the first salmon. Then Hans hit the biggest and finally landed our third - making "the most". Then it was dark and we crawled our way up to the cabin for bed. 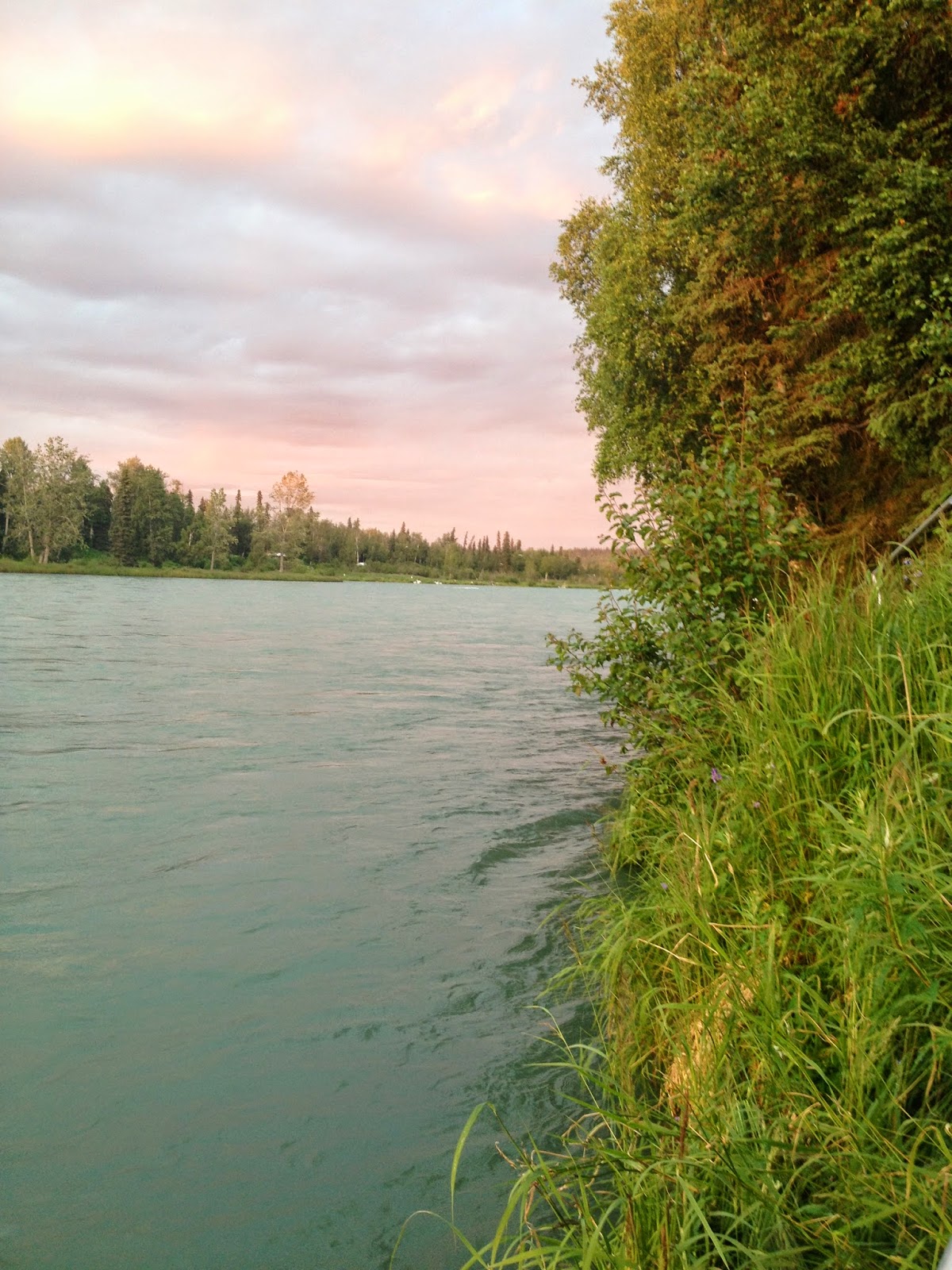 Sun is setting about 11:30pm on the Kenai River. 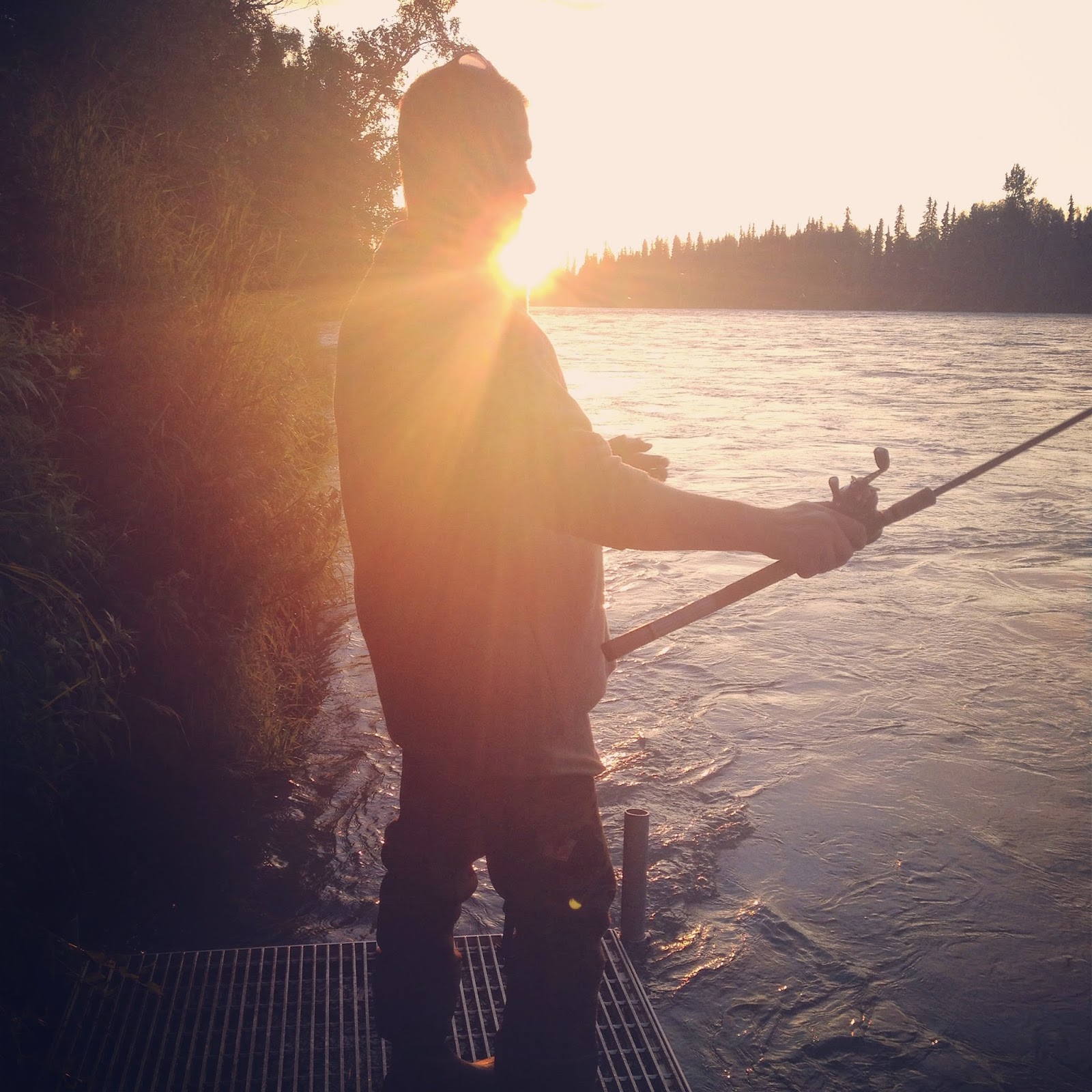 Skadi is the type of kid that always finds a friend to play with. I envy her this. At the fish camp was no exception. She happened upon another little girl and the two played and played and played. This freed up Hans, my MIL and I to alternate with caring for Silas amd Leif to either fish or read depending on his mood. The child plowed through some serious book volumes on this trip.

So Hans and his mom spent a fair bit of time fishing and were skunked. Hans finally tired of this treachery and went to care for Silas. I took over the pole. Salmon on and in. It must have been a fluke. Then I caught another and for the trip we were now 3-2. 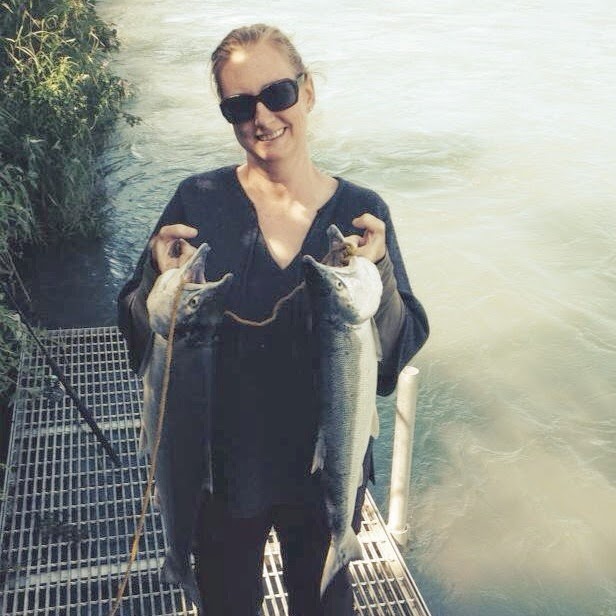 Hans and I have a very equal relationship - we aren't terribly competitive and if I am better than him at something it isn't a dig deal. All that goes out the window with fishing.

I knew we were now stuck there until Hans pulled in at least one more fish and quite possibly 2 - so that he could win.

His determination won out and he and Leif pulled in one fish - fulfilling one of our huge goals to have our nearly 10 year old feel the strength of these fish on the end of your line. Then he pulled in fish #7 to secure the lead for the trip. 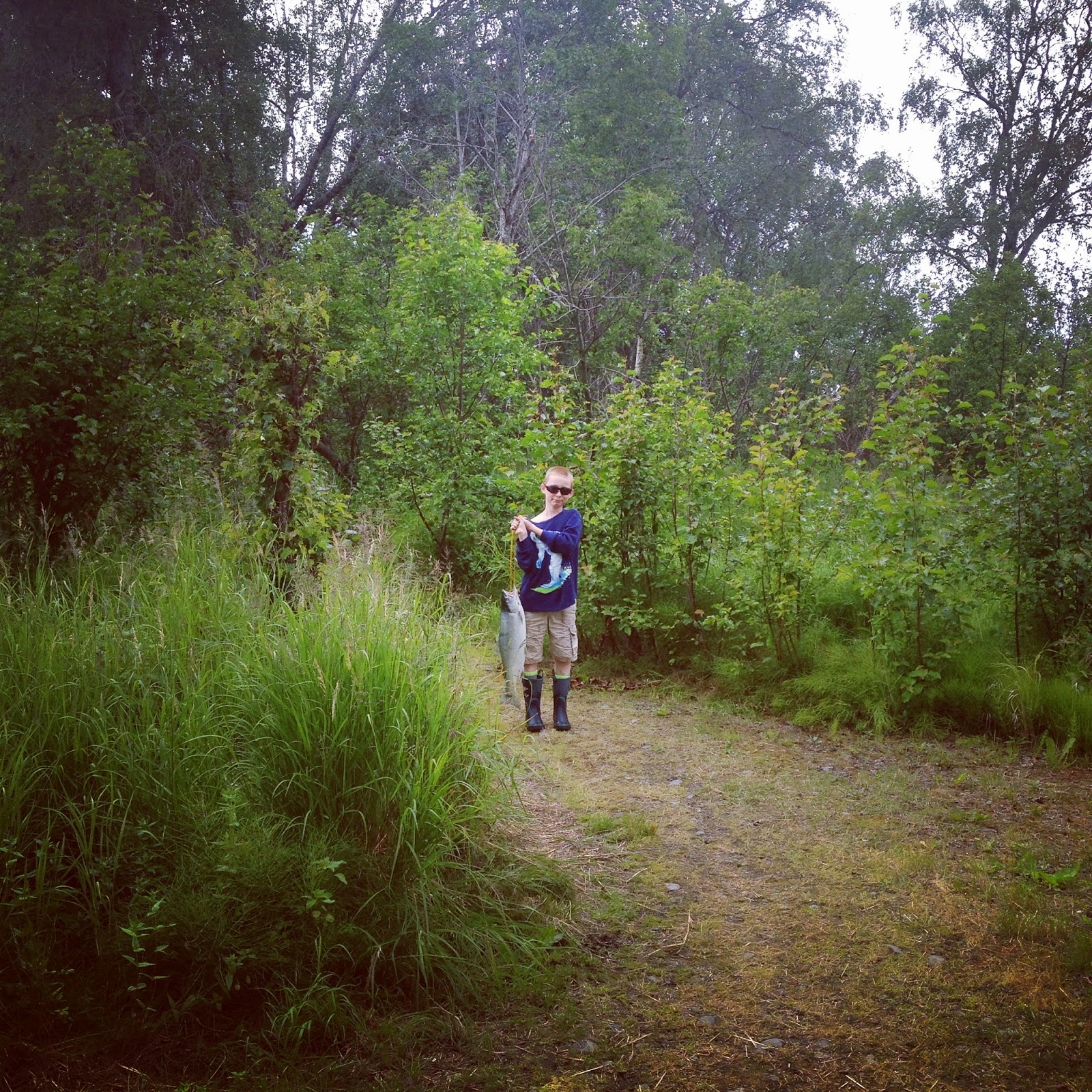 Coming down the path carrying his prize. 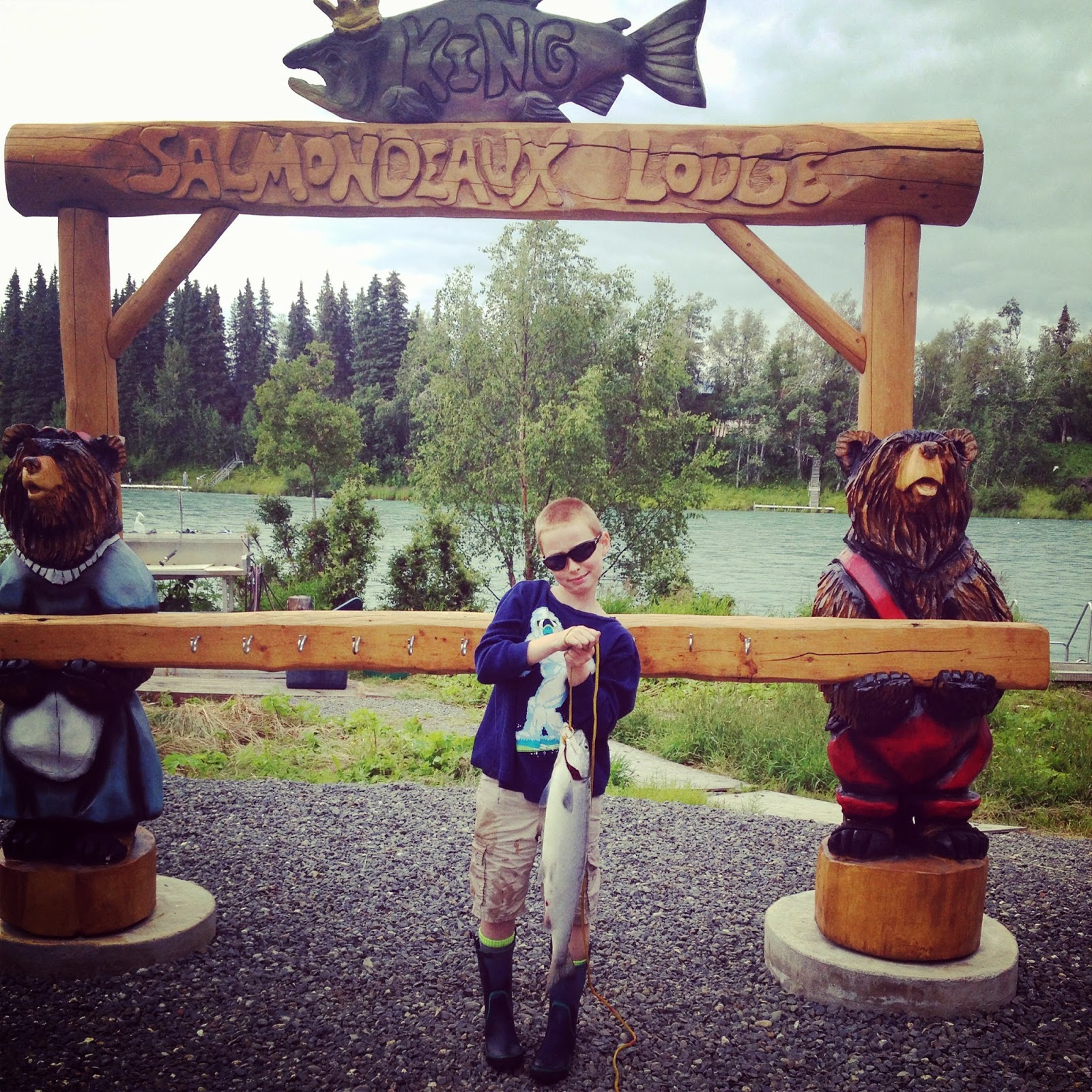 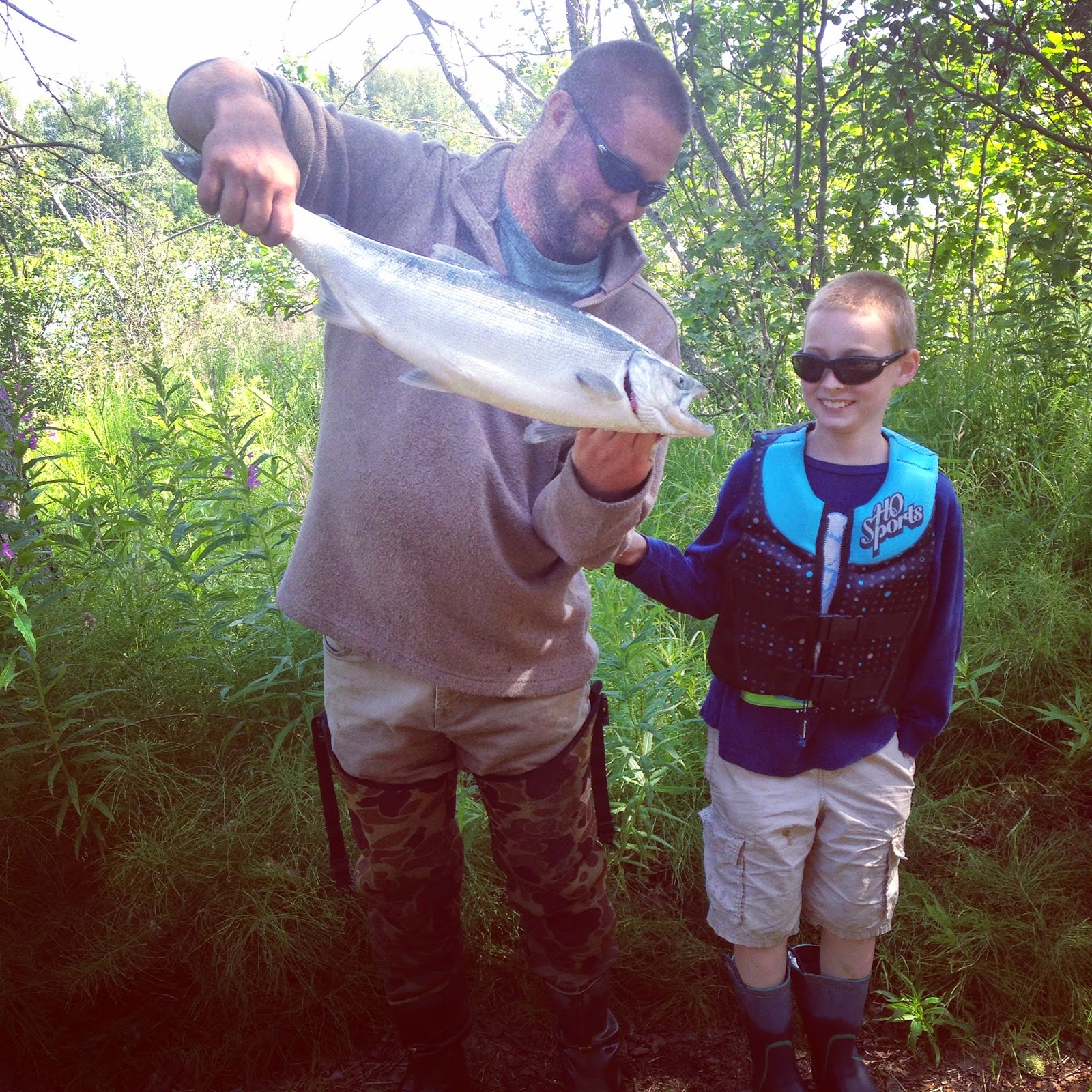 Fishy kisses!
We wrapped up our Soldotna experience having restocked our groceries, frozen our 7 fish and saw a few moose. We enjoyed fishing at a fish camp as opposed to fishing in the public access areas where Hans and I have fished for the many years before. The shoulder to shoulder fishing just isn't fun - nor is it without safety concerns - we saw a man with a big old fish hook in his cheek at one point. Yikes!
We set out for Seward, Alaska to meet up with my FIL and his wife! One of my favorite places on earth. I have only been to Seward once before - about 18 years prior I suspect in 1996. I was anxious to take the kids to the Sea Life Center and to just have some time in a beautiful place. 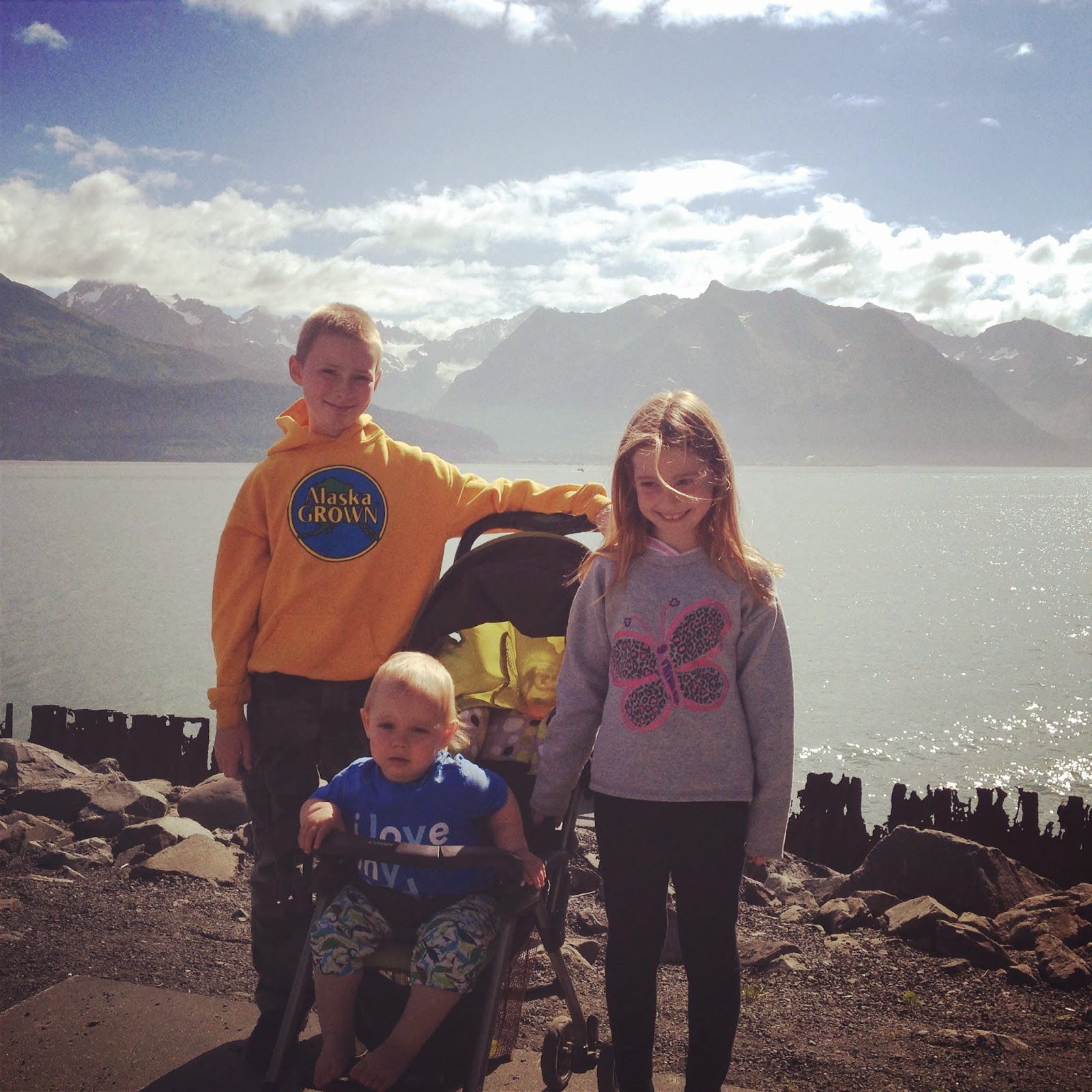 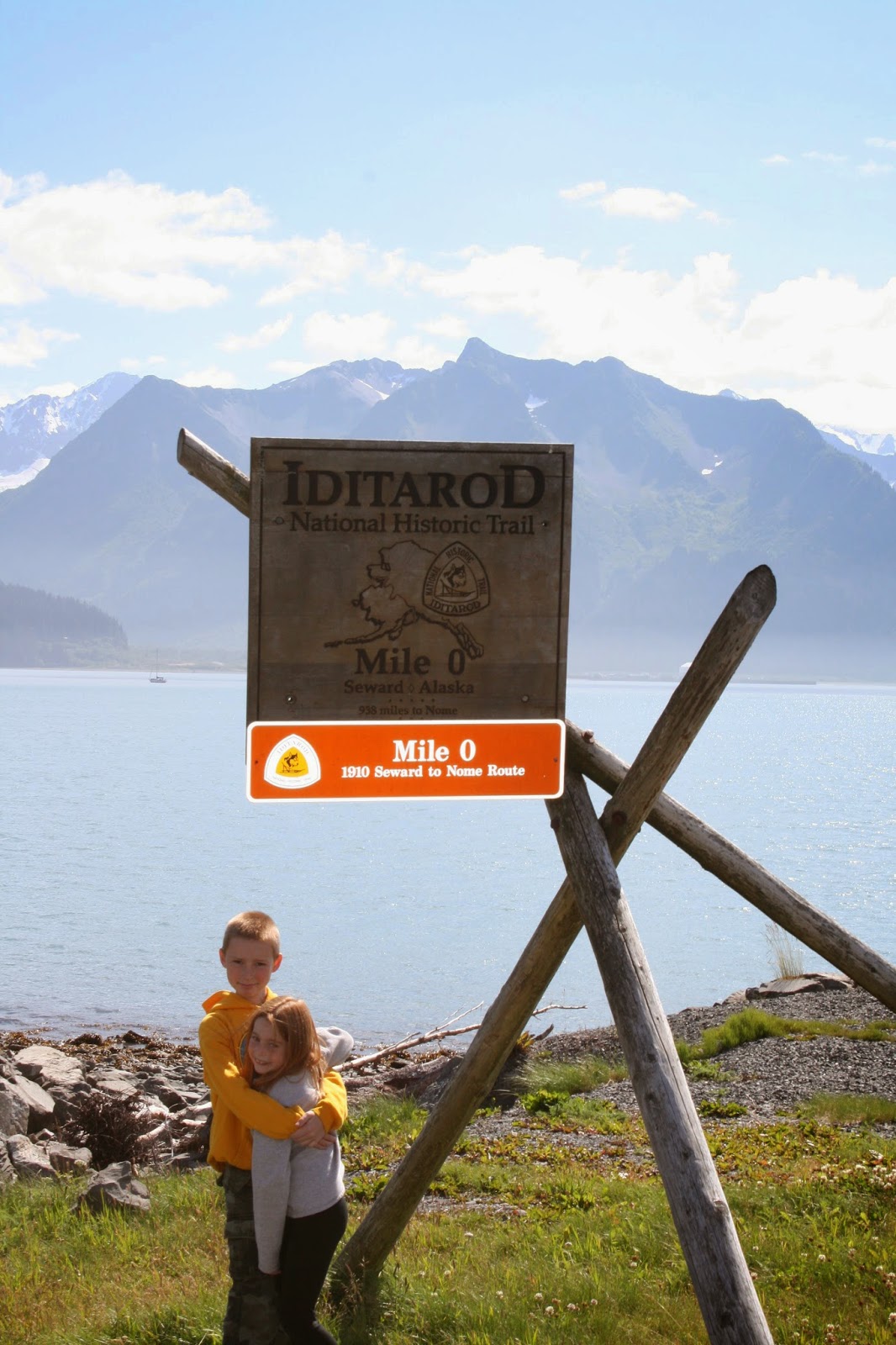 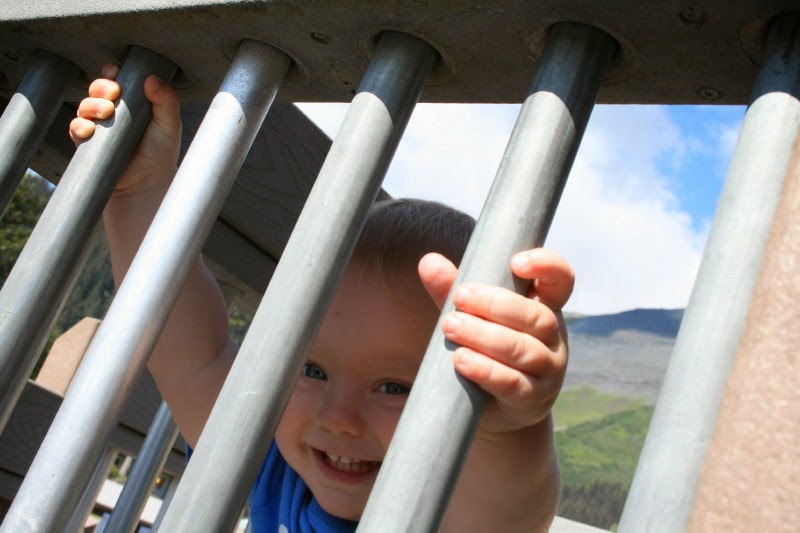 And imagine, they even have a nice park to play in! 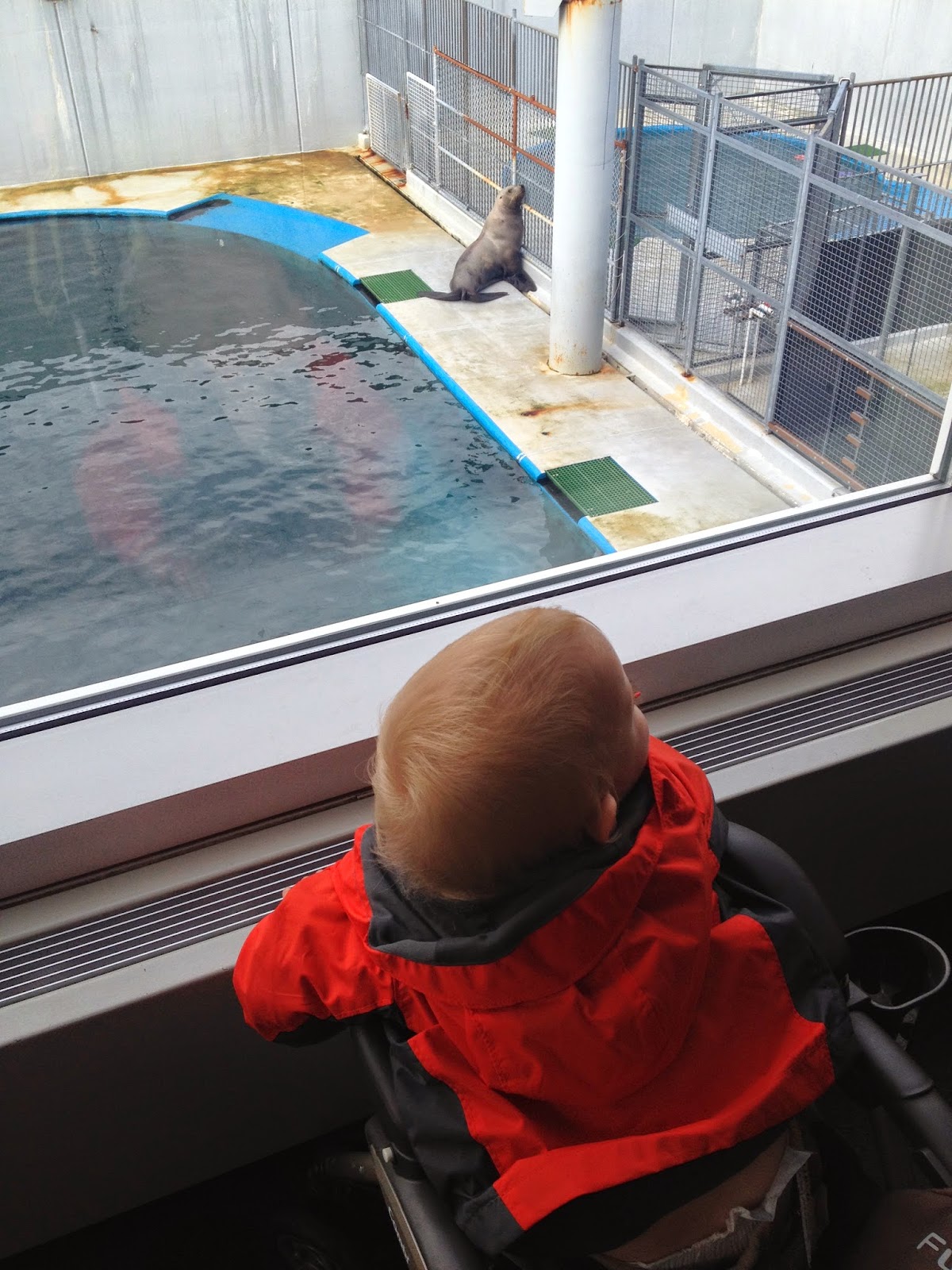 The Sea Life Center - Silas loved the sea lion.
I missed it for unspeakable reasons (sigh), but Hans took the kids and grandpa paid a small fortune for the Octopus Experience at the Alaska Sea Life Center. An hour up close and very personal with an 80 lb octopus. Hans still ranks this as one of his top favorite things we did during the two weeks. He has footage of the octopus crawling up his arms and the kids feeding it shrimp. Apparently Skadi was a bit freaked out by it, but finally came around. 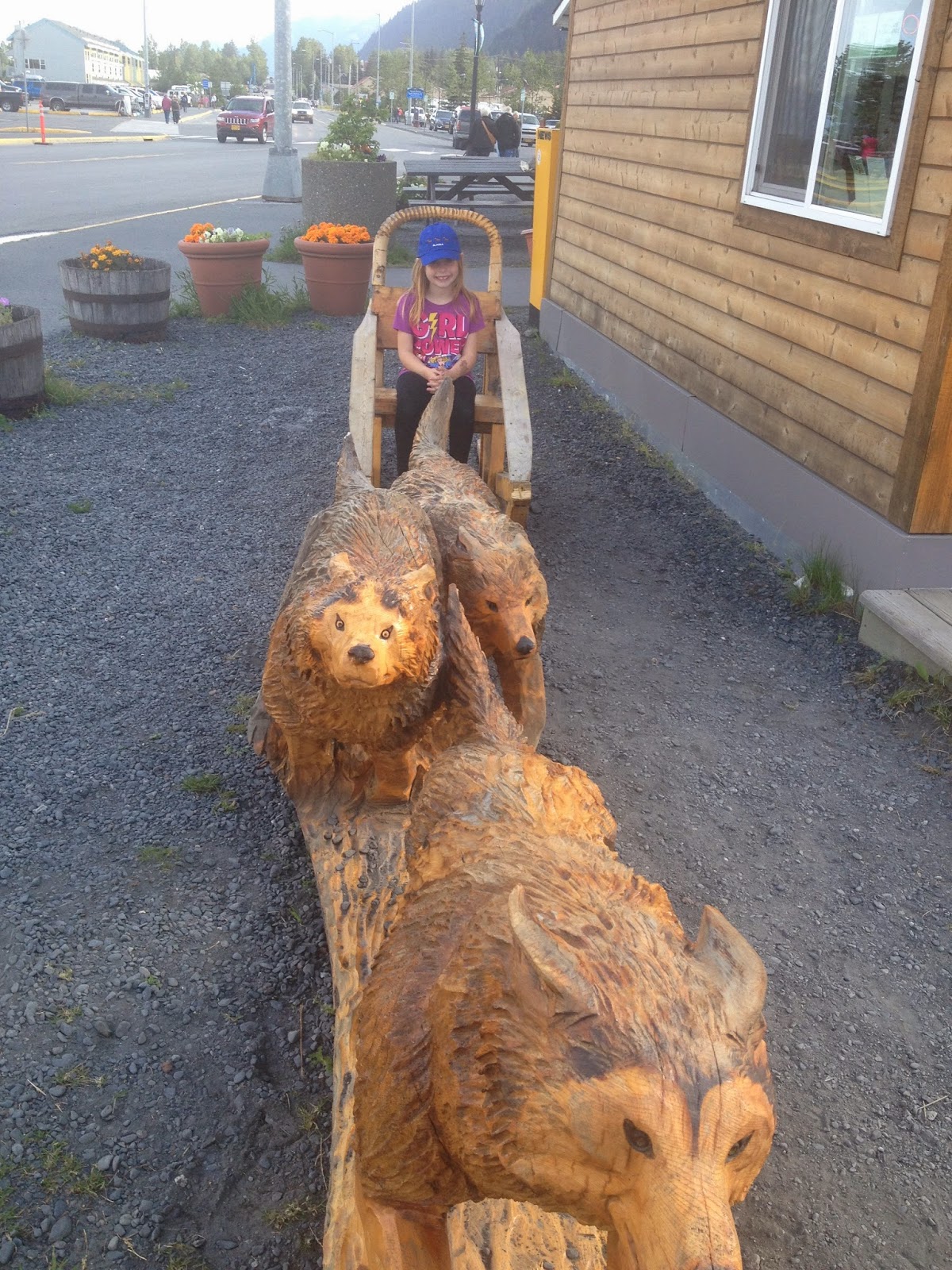 Skadi outside the Seavey dog sled experience. We were going to do it - Skadi was DYING to hold the sled dog puppies and was begging to pick one out to bring home. - but logistics just weren't working in our favor. And then we found it that it wasn't actually going to be Dallas Seavey to take us out. And Leif's interest then waned too. 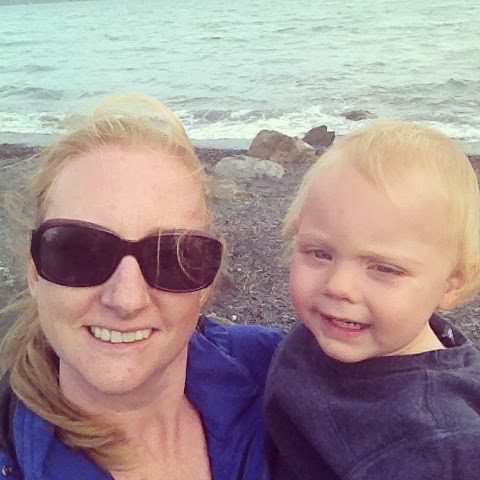 We went to Lovell Point and hung out on the beach a bit. 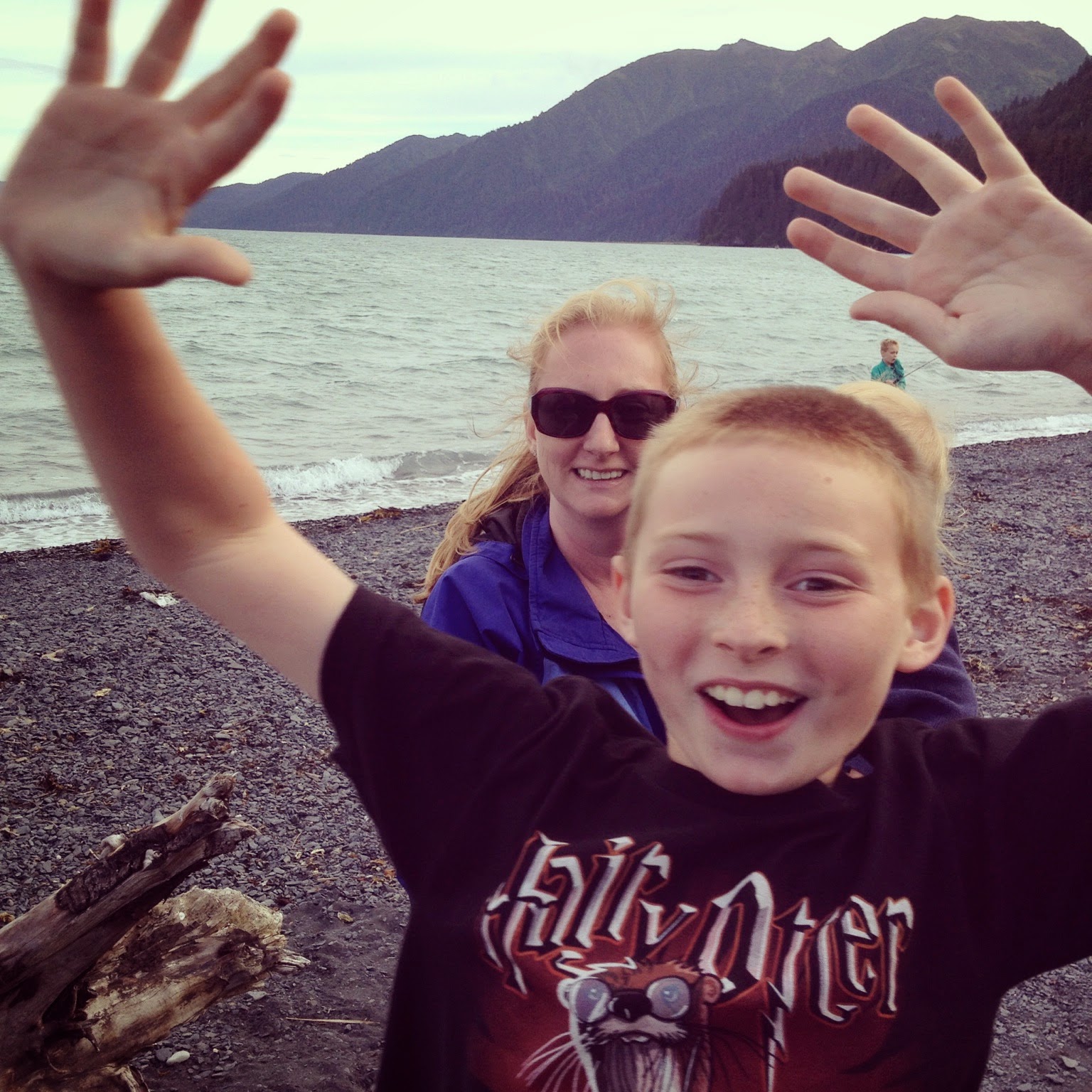 Photobombed by my oldest.﻿ 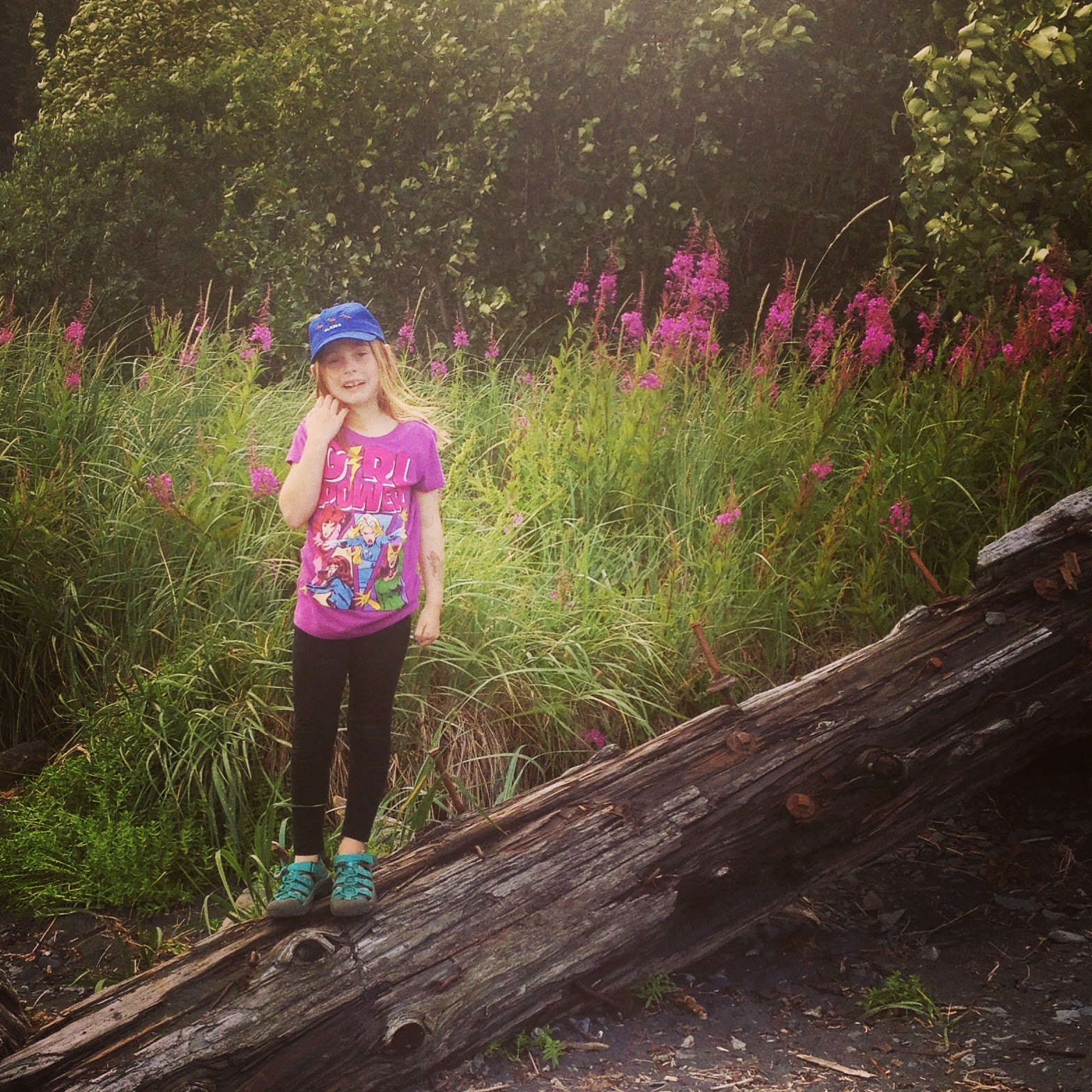 Our girl with the fireweed. Love. ﻿ 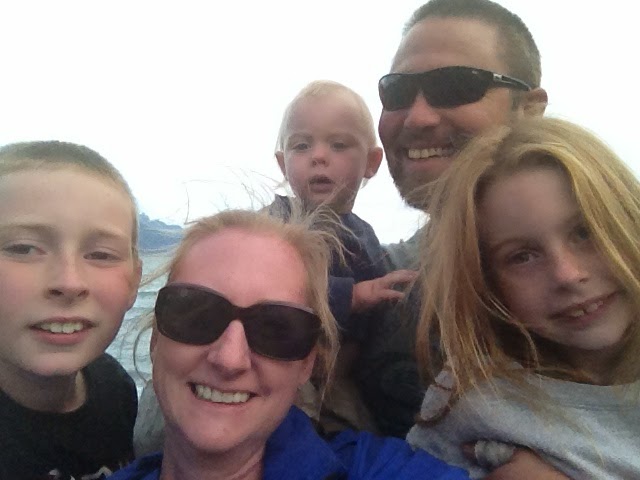 Family of five selfie. Do you know how hard this is?

About 18 years ago Hans and I went to hike Exit Glacier. We had a great time wandering around the glacier and crawling inside the little side caverns.

Not anymore. Not only do you not get close enough to touch the glacier, but you would never walk into a side cavern. The glacier has receded an incredible amount. 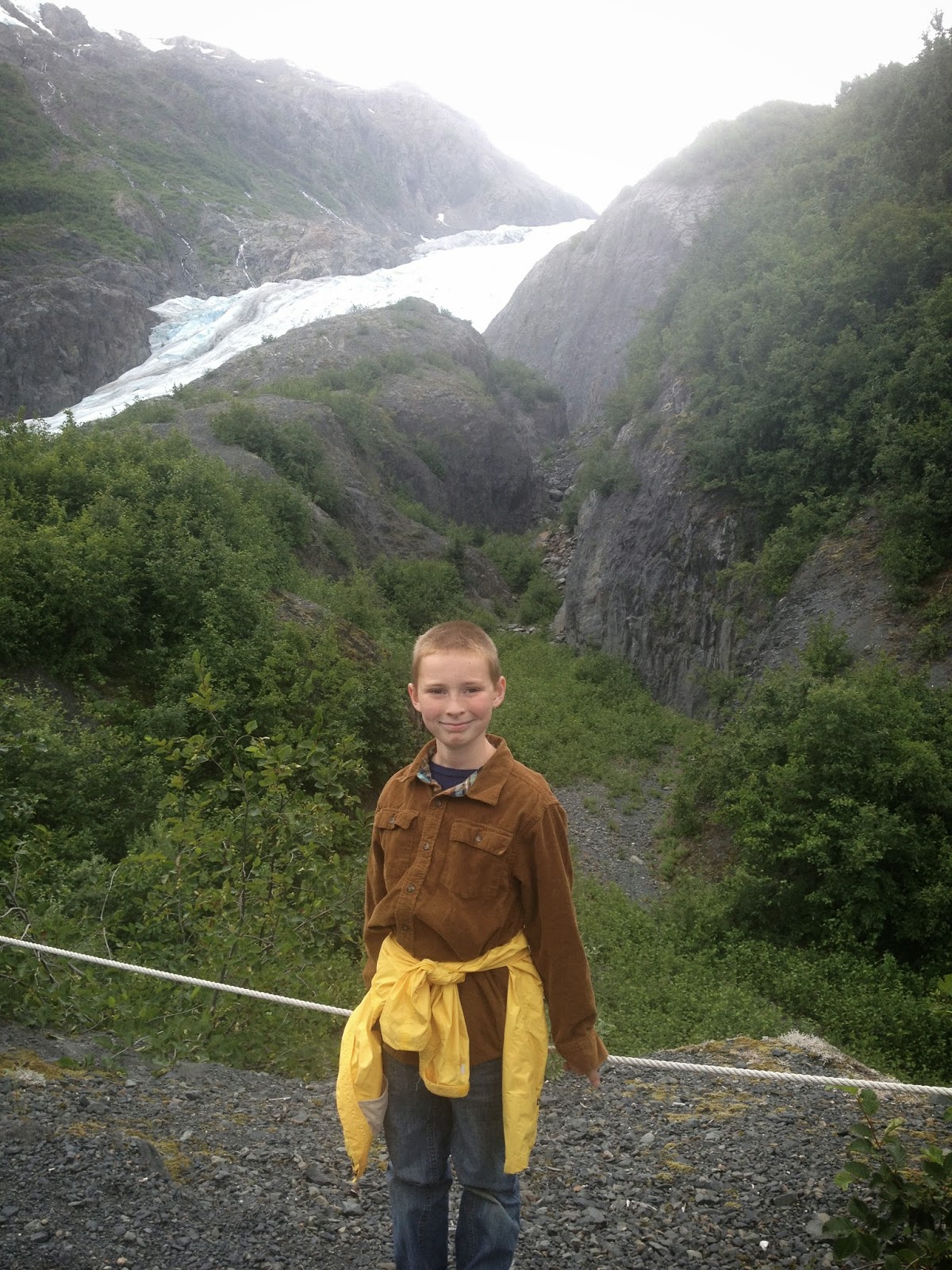 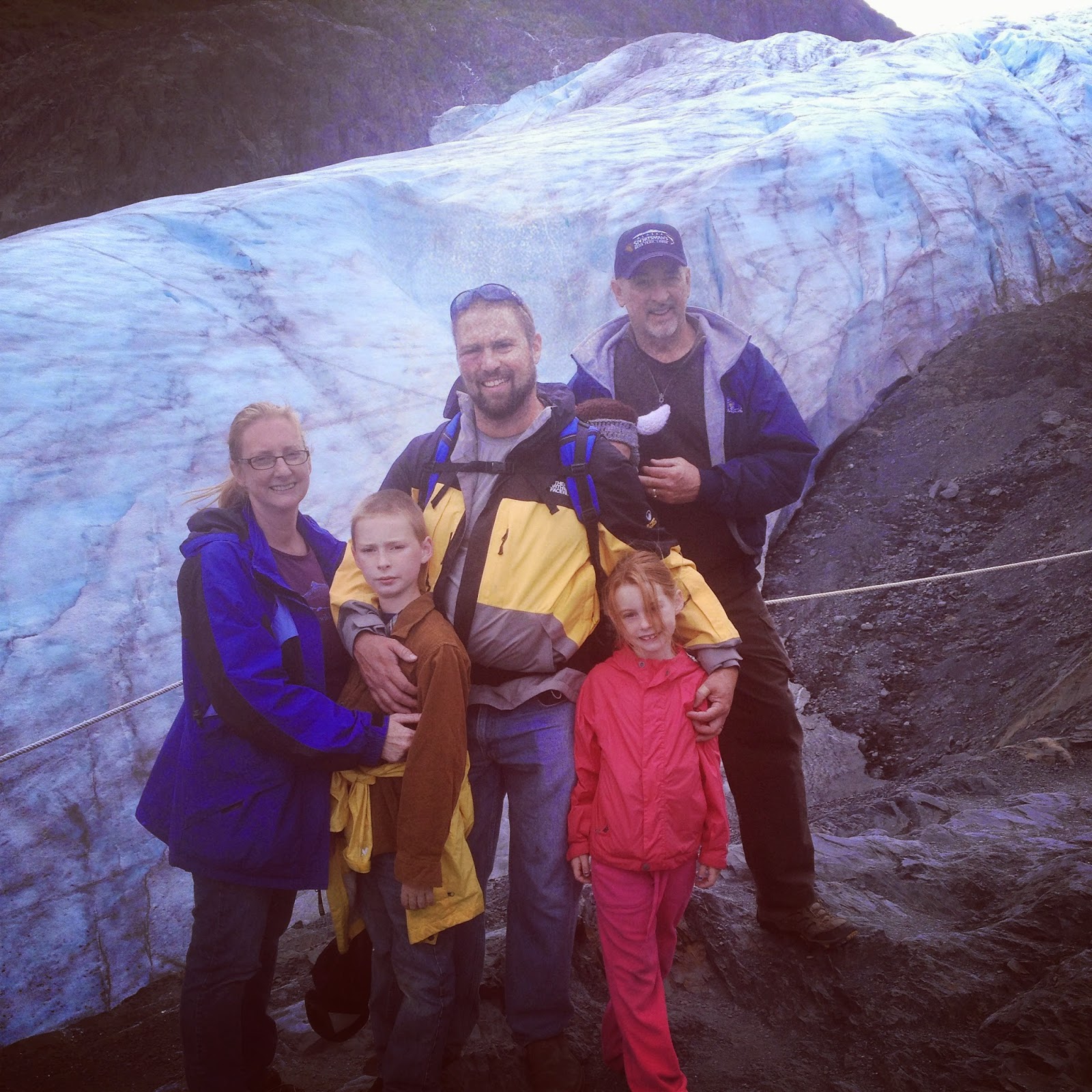 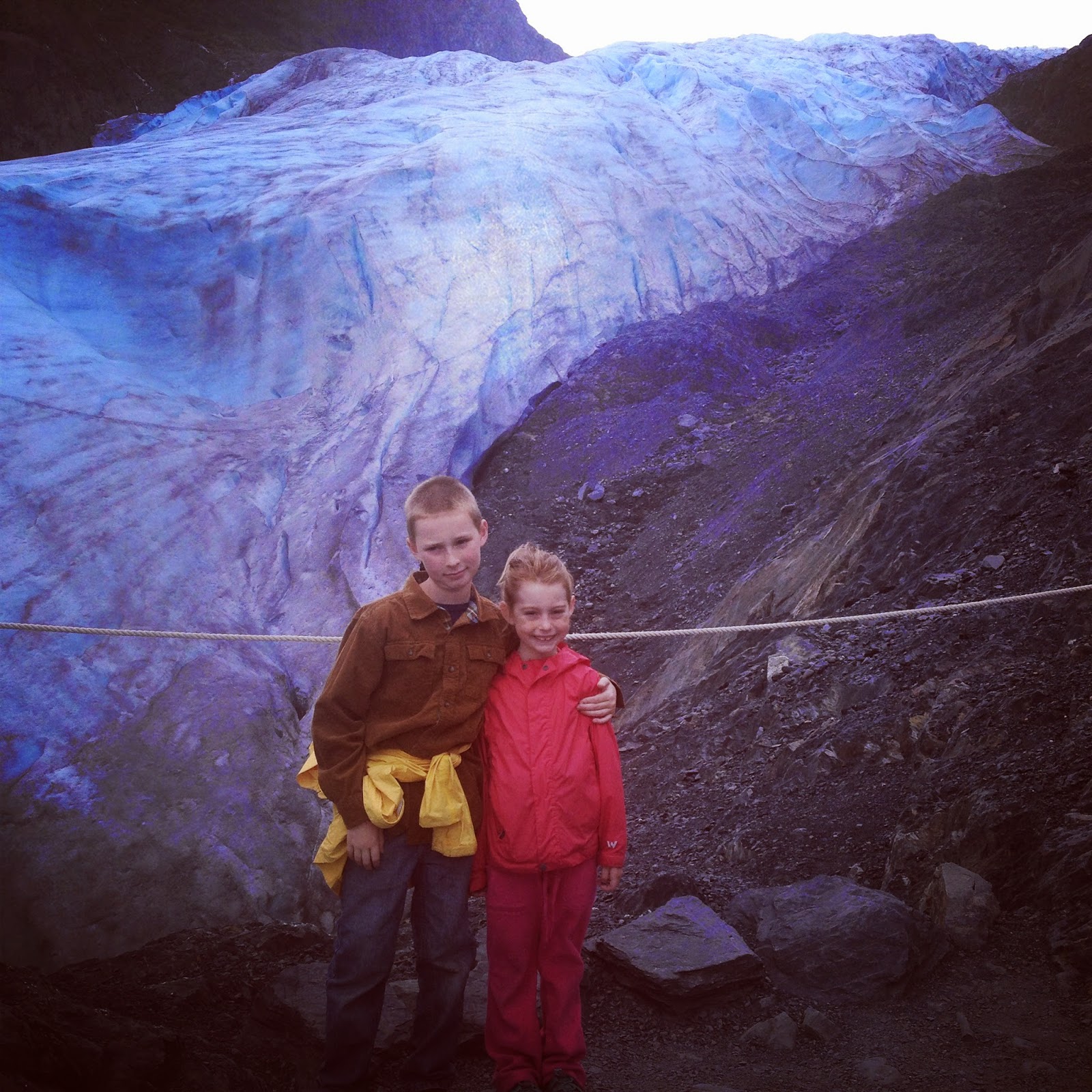 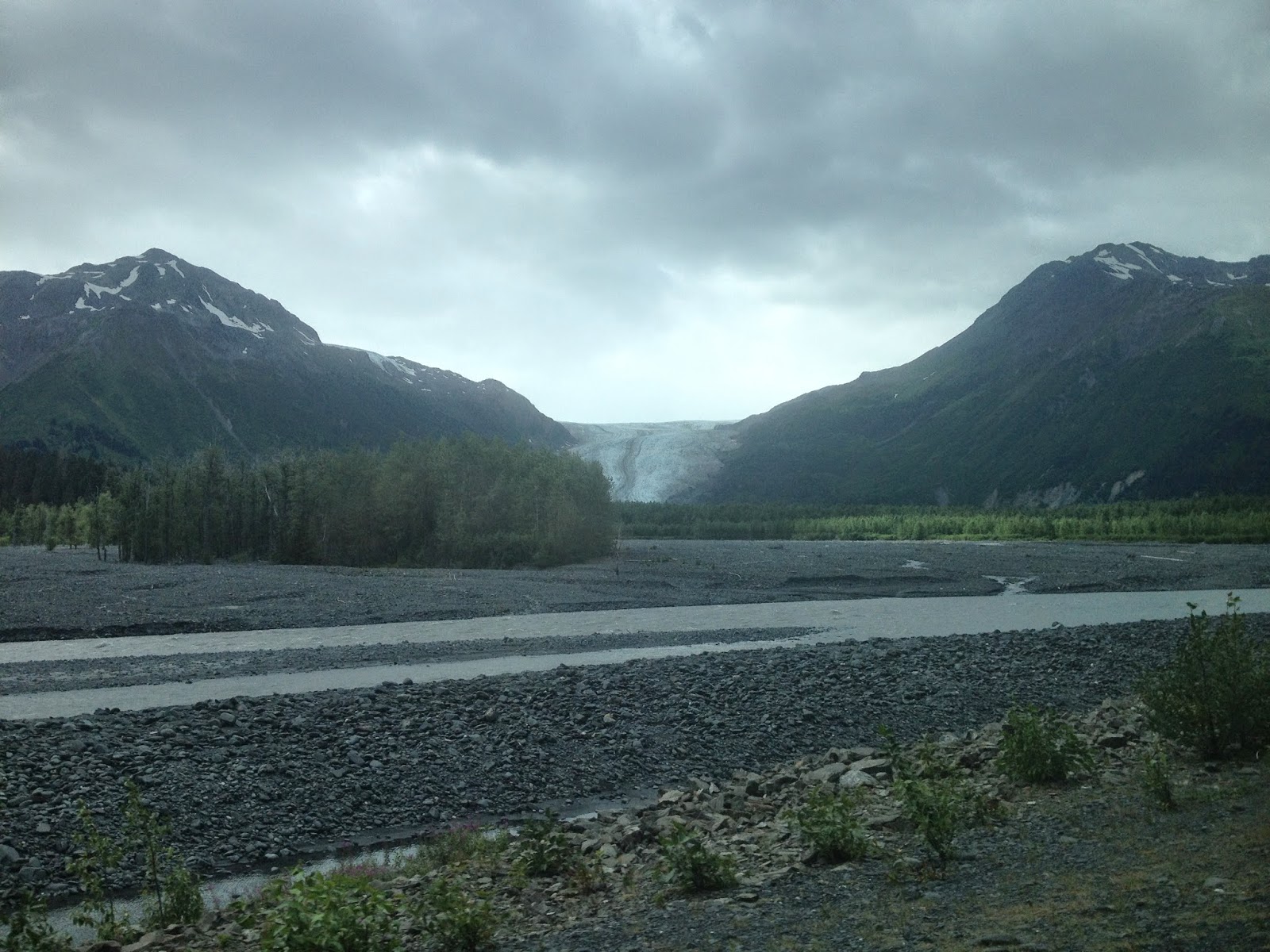 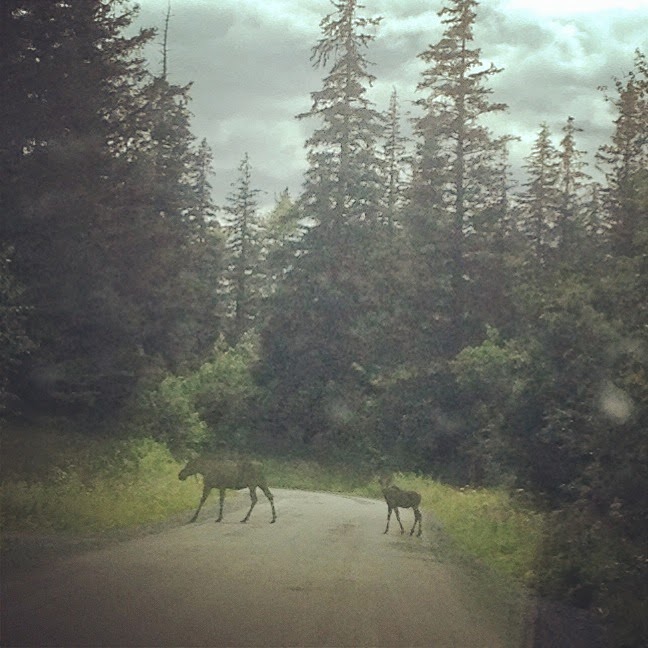 Two moose - a mama and a baby - on a side road after we took a wrong turn.
This wraps up a week out on the Kenai peninsula. After seeing the moose we made the trek back to the big city of Anchorage for the second week of our vacation.
Posted by Nuclear Mom at 5:08 PM