Skadi has a set of favorite bath toys. She likes to switch from the Master bath, to the Master shower to the bathtub in her bathroom pretty regularly. But one thing is constant - her toys.

The mermaids come as no surprise. These little girls follow her everywhere.

The weird one though, is "the red man". 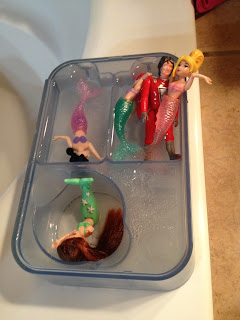 That would be Mork.

No matter what, the red man must be there with these girls.

I don't know if he is a bodyguard, father figure, boyfriend?

For awhile Leif decided he was going to latch on to Mork to drive the airplane that he likes to play with in the bathtub. True that he fits. And might be true that he was the only male action figure around that fit in there. But the fit my daughter threw about not getting the "red man" was legendary.

I suppose I should be a good mom and not cave to her wills. But there is that park of me that found it all so humerous... that I couldn't resist telling Leif that "no the red man is Skadi's special bath toy" and found him an action figure that would fit in the plane.

I have been wondering if I can find an old "Mork and Mindy" episode around anywhere...

Very funny! There are lots of Mork & Mindy clips on Youtube. :)