To cut or not, that is the question!

I remember my mom's voice so well as she complained about my hair.

"If you don't keep your hair tied back nicely, you will have to cut it off," she would say.

And I would cry.

So I would keep my hair pulled back and brushed, until the next time, which was usually just a week at most away. My hair was a long battle with my mom.

Skadi has just recently decided that she doesn't want her hair in "ponies". For awhile there I got away with hauling hair bands into daycare and letting them tackle it since she wouldn't allow me without serious bribery.

(The result of bribery is below... "if you don't let me do your hair, we won't get to go to the pumpkin patch with Cate." I know... I shouldn't threaten anything I am not willing to follow up on, but it works.) This is contrary to this past year and a half or since she had long enough hair to stick in itty bitty ponies. She loved having her hair done. 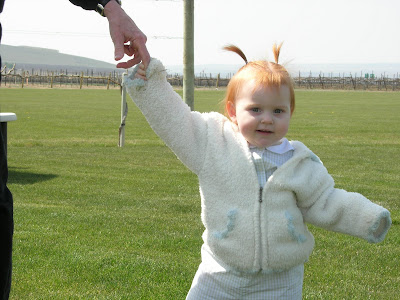 And she loved having it done in wacky ways too. 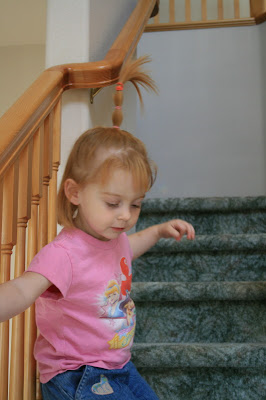 And she has beautiful hair if she would just let me keep it brushed all the time, like this: 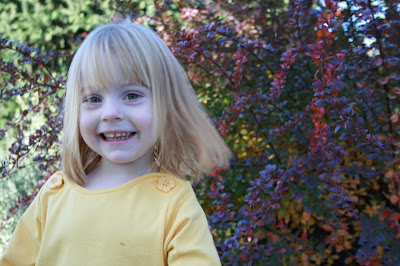 But this is a rarity. It is most often coated in some unknown substance (usually yogurt or snot).

I am thinking the scissors are going to meet the hair this weekend. I am actually taking her in to get it cut and I am angling for a shortish cut. I thought I might have to convince her, but so far she is on the bandwagon to cut her hair.

I replied, "no, not that short" envisioning myself at her age and how that would have sent me over the edge.

"Unless you want it like a boys," I told her reminding myself that boys are wearing their hair longer these days. I let Leif's get pretty long and scraggly between trims and if he didn't inherit AB's AND my fine straight hair, I would let it get longer.

I am taking that as indifference on looking like a boy or not...