Vacation-ville Part 3c: Castaway Cay and the last day on board

Where Cay is pronounced Key. It's an island in the Bahamas where we stopped the Friday before getting back to Florida on Saturday. It is a private Disney island that is actually pretty amazing. No one lives on the island, but it is manned by the staff on the boat. So the bartenders pick up their show and move to bars on the beach. The chefs pick up their thing and open a restaurant on the island. And they manage to set all this up in about an hour the morning we arrive.
It was a nice and relaxing place to hang out. No worrying about getting around, no worrying about being left behind, plenty of watercraft and a variety of activities. Unfortunately the day we were there it was still a bit windy (the night before we endured 70 mph winds that shut down the outside decks on the ship) and our glass bottom boat trip was cancelled and many other activities were cancelled as well.
That's ok. We hung out on the beach - steps from a bar and the BBQ pit.
The big adventure of the morning was when we lost Leif. We lost him, he didn't lose us. Apparently he knew where we were, but packed up his snorkeling gear and went snorkeling by himself! It was ok. He had a new sense of freedom while being on the ship. He stayed out late and did his own thing much of the cruise. Never mind that the entire family was looking for him!!
Silas enjoyed playing in the water. The beach sand was awesome, light and fluffy. The water was a bit cool. But it was a great day.
While I was off looking for Leif, Silas was hanging out on the hammock with Aunt Tara when SOMEONE made an appearance! RIght next to him! Heaven! 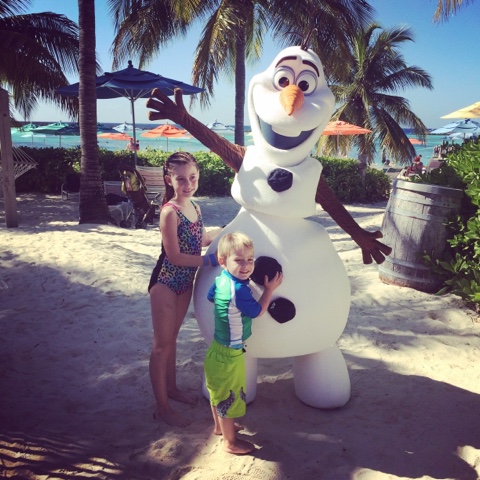 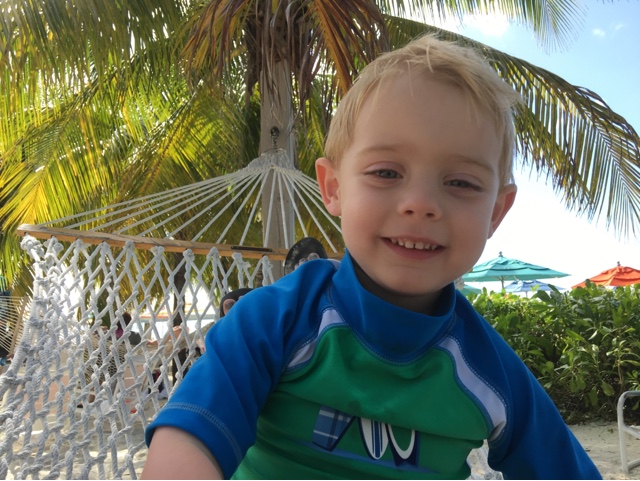 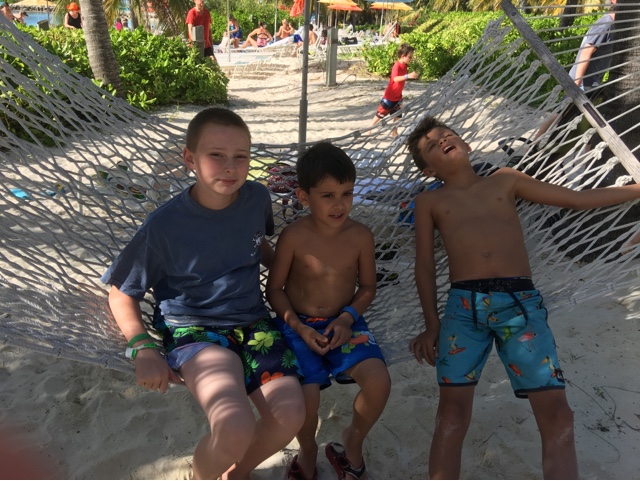 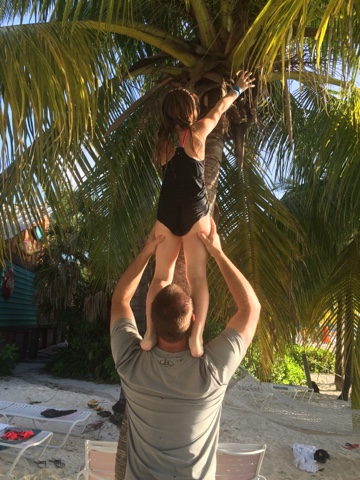 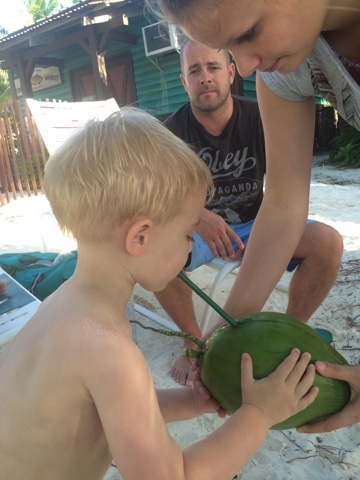 Uncle Eric managed to retrieve a coconut. Silas is my adventurous one - he was totally willing to try. It was kind of gross (green). But we tried it. 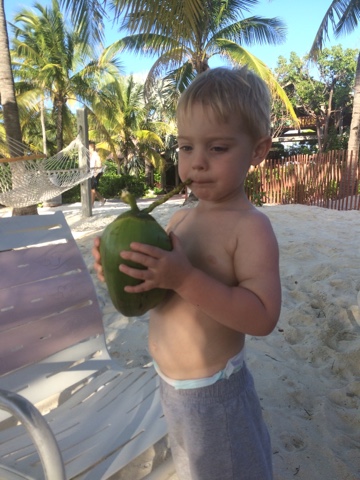 But Silas was convinced that he was going to get coconut water out of every one he found. Stem, straw, same difference?
Once again it was an early return to the ship - 4pm. Then we enjoyed our last evening on board. Enjoyed means that I spent the evening packing our room up. Leif disappeared to the Edge and didn't return until late. Skadi and Silas played in the up bed and we also discovered that there was unlimited Disney movies on demand! Sigh.
Hans spent hours (might be an exaggeration) standing in line at guest services reviewing our bill. Remember that our glass bottom boat tour was cancelled? Yeah, well Disney hadn't. We also bumped up our gratuities to our server and a few other service providers. Our server rocked and having a sister in the food service industry makes me very cognizant of proper treatment of servers and being good patrons. It is a bit shocking when you see your automatic gratuity bill. But remembering that you are paying for eating out for a week for 5 people - one being a messy toddler - you just have to do it. Sure you can (and I am sure some people do) go and reduce your tip amounts to zero - I have seen on discussion boards people complain about the tipping practices. But from experience - they work HARD on a cruise ship. 7 days a week.
I also went and ordered a few pictures. Lots of opportunities for pictures on the ship and Castaway Cay - but the photo pass is crazy expensive (over $300). The minimum number of photos you could buy was 10. I kind of wanted either 3-5 or 25. I had a horrible time choosing 10, but I did it. 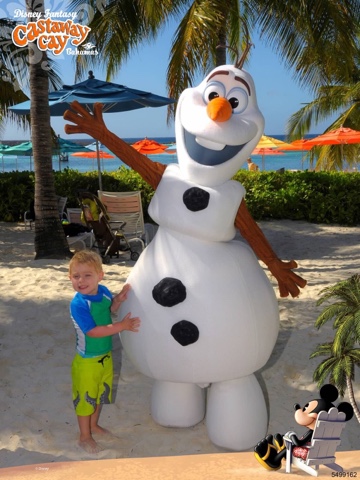 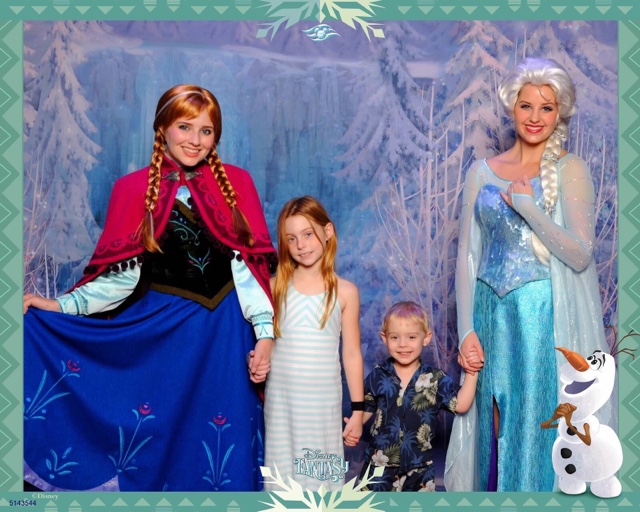 This one was a must do - even after 6 weeks, Silas still talks about meeting Anna and Elsa. I will also add that I am pretty sure they place them secretly in the dark forcing you into buying the professional photo because all your photos will be horribly dark. 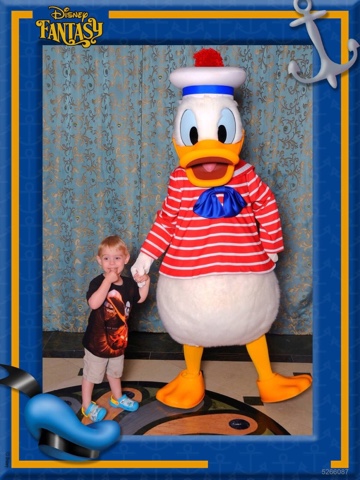 One of Silas' favorites. 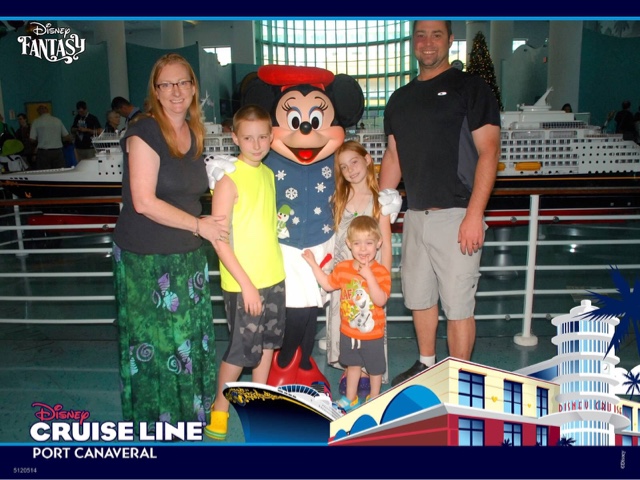 Getting ready to board in the port. 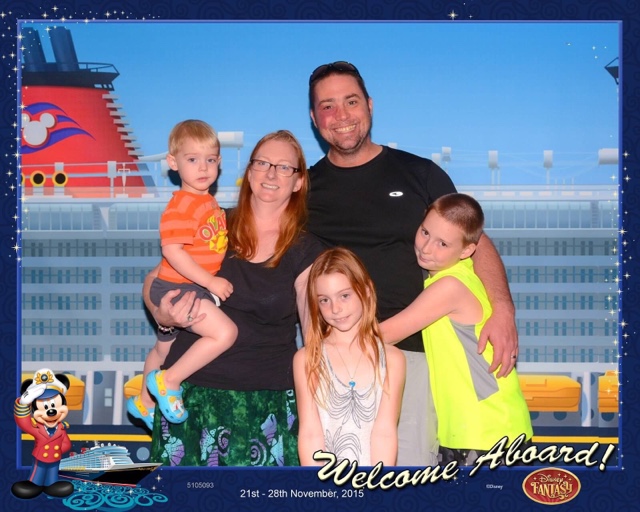 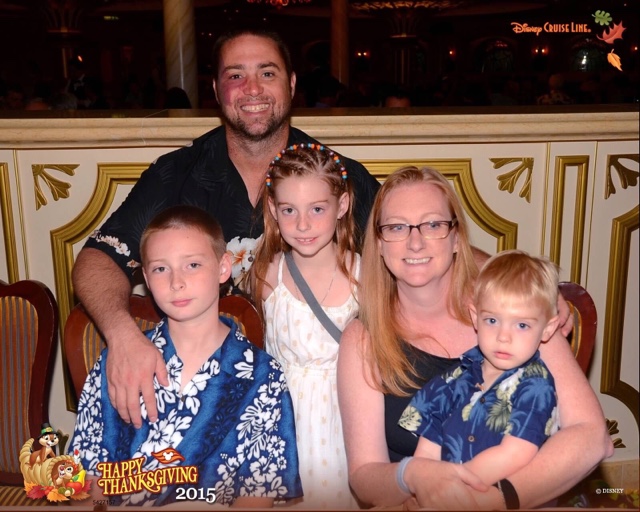 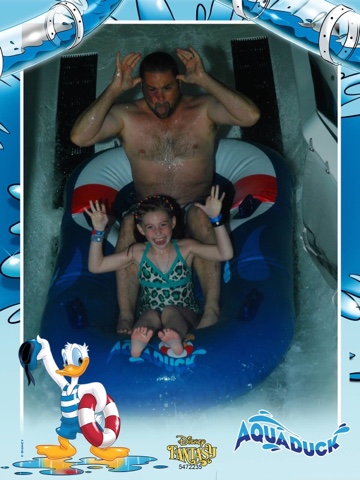 The Aquaduck. Skadi spent loads of time here - it took her mind off the seasickness. And she and AB figured out where the camera spot was. They had some awesome photos! Mine with her wasn't too bad either. But I didn't buy it. Not sure when this photo was taken, but I liked it. 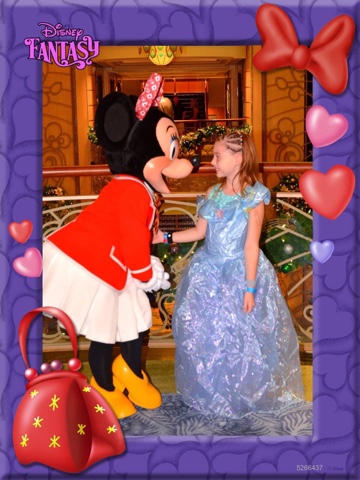 This was one of my favorite character pictures. 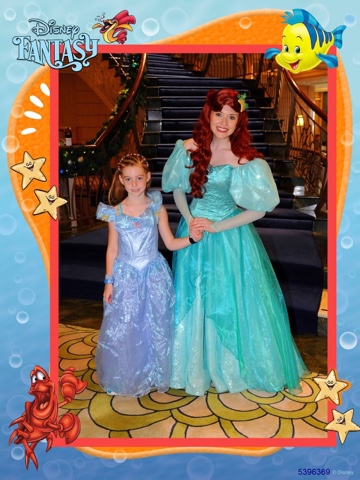 Skadi's favorite as a kid. I had to buy the Ariel photo.
Before long it was morning and departure time. Everyone had to be OFF the ship by 9am. They have the MOST inefficient method for picking up your memory key of photos you ordered the night before... I stood in line at 7am for about 45 minutes. We opted to skip the breakfast - our seating would have been at 6:45.
When you get off the boat and get ready to clear customs there are porters who offer to help with bags. TAKE THEM UP ON IT. It was well worth our money to have someone with a dolly to carry all our stuff through customs and to the rental car stand.
Finally, you are off, free! Back to civilization and on to the next adventure! Disneyworld for THREE days!!
Posted by Nuclear Mom at 5:31 PM