I may be onto something!

A few weeks ago my son's pickiness came to a head with me. It was driving me insane.

But my son has recently taken picky to a new extreme and it was driving.me.insane.

"Fine then," I told him one evening. "Once a week it is up to you to plan a dinner with me and help prepare it."

I knew then that my biggest challenge with this would be ME sticking to it and not falling to the "I don't have time for this tonight".

The first week Leif declared he wanted to make "egg pie". Just like that.

"Sounds like a quiche," I declared and found a simple recipe.

I made the crust... because you just don't mess with crusts. Someday I will teach him the art, but he needs a few primers in other food prep first.

He mixed the eggs, the cream, cooked the bacon and by himself chopped the broccoli. AB shredded the cheese. We mixed it all together and tossed it into the crust. Wa la. One amazing quiche. And Leif was proud of himself. He grinned from ear to ear as I took his picture and posted it on Facebook.
"Mom," he said, "I don't want you to fix any other food because I want Skadi to have to TRY this, it is so good."

Oh the irony. Words that I have recorded well... because he IS going to hear them again.

Then last week Leif came home from school and declared that he wanted to make latkes.

Latkes, as in potato pancakes? I asked. My mom used to make latkes, but I don't remember them well.

You see Leif has a weird and unexplainable potato aversion. He doesn't eat French Fries, Tater Tots, Potato Chips, Mashed Potatoes make him gag, backed potatoes give him the willies.

I am not sure he is mine because *I* am the opposite. I love potatoes in all forms.

I agreed and AB started cautioning me, "make them as Leif friendly as humanly possible, the potential for disaster on this one is HUGE. And you don't want this to be a disaster".

I treaded carefully. No onions. No toppings. Just plain latkes.

We peeled the potatoes. Ok, Leif peeled a half a potato and in the interest of having them ready in under 8 hours, I did the rest. He shredded them in the food processor, mixed the eggs in and the flour, put them in the colander to drain. We did a whole safety talk on hot oil. Then he stood there handing me quarter cups full while I dropped them in hot oil and pressed them flat.

OMG they are good. So freaking good.

Skadi, who doesn't care for potatoes much more than Leif except that she will eat potato chips and fries (sometimes), ate two. AB and I nommed on them.

And Leif ate one and said it was "ok". 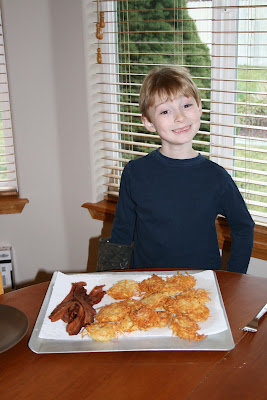